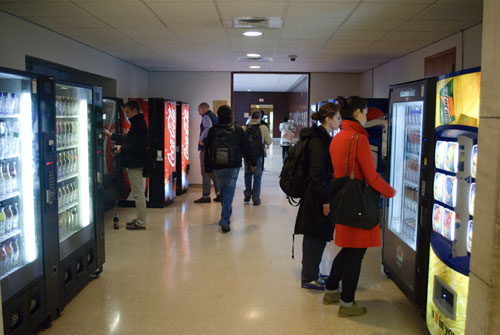 The army of vending machines in the International Affairs Building offers everything from canned coffee to unusual ice cream bars.

The irony of technological progress is strangely evident in the world of the vending machine—any poor soul whose Skittles have gotten stuck on the machine's little twisty-screw-thing can attest to this. No law or greater power will answer the futile banging of clenched fists on Plexiglas. Nevertheless, vending machines have an established place at Columbia, where full meals and balanced diets are few and far between. Luckily, vending machines on campus are abundant and especially helpful for students who don't want to leave their study space as the weather turns cold. Around campus, vending machines are not always in plain sight, but rest assured, one is probably close at all times. When in doubt, students can close their eyes and listen for the dull hum of those non-judgmental purveyors of things both yummy and salty. Most offer the standard fare of unhealthy foods, but what sets the best apart from the rest is not quality, which shouldn't be expected to begin with, but quantity. For this, be brave and leave the familiar main campus for the unbeatable open market at the International Affairs Building. Just outside the auditorium of 417 IAB lies a veritable "miracle mile" of deliciousness. Thirteen—13!—separate machines flank either side of the narrow hallway and, much like a gang of schoolyard bullies, seem to surround the weak-willed and take their lunch money. There is even green tea and Italian Illy coffee. After all, this is a building of international affairs. Best of all, an ice cream machine sits hidden in a corner a little further down the hall, seeking to reward the brave and adventurous with Toasted Almond Bars. For more adventurous Columbians, a few vending machines around campus supply a more specialized fare. The energy drink machines in Butler 214 sell weird neon potions that make most students jittery and uncomfortable. The hot dog machine on the fourth floor of Lerner offers, well, hot dogs—sodium, nitrates, and nitrites all come packaged in this particular triumph. On one occasion, a sausage and bun were already sitting in the dispenser—how long it had been there was not detectable. It may still be sitting there. Food from a machine will always be a sad alternative to something better. Still, despite student disdain and repeated avowals to eat better from now on, vending machines are there for desperate times, lighting the way with their eerie fluorescent glow.