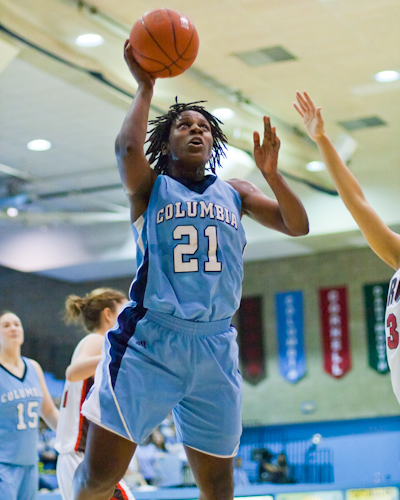 The women's basketball team had an impressive 2009-2010 campaign, earning the program's first winning records in overall and conference play. The Lions finished the season 18-10 overall and 9-5 in the Ivies, earning third place in the conference standings—the highest finish in the program's history. The Lions began the season strongly, winning three of their opening four games: They triumphed over Sacred Heart in the season opener before beating Long Island and Manhattan. Their lone defeat was a narrow 61-58 loss after overtime against Oakland. This bright start was halted at the University of Nevada's Nugget Classic, where Columbia lost to home team Nevada and to Iowa. The Light Blue bounced back after that setback, taking eight of its next 10 games in December and January. This run included two wins against conference foe Cornell. St. John's and North Carolina State were the only teams to get the better of the Lions during that period. Columbia's offense was dominating games, scoring 70 or more points in three of its first four games in that stretch. In the team's 73-49 demolition of Wagner, then-junior forward Judie Lomax amassed a career-high 30 points. The Lions showed grit and determination to defeat Robert Morris in the final game of 2009, in which then-junior center Lauren Dwyer just beat the buzzer with a three-pointer to give Columbia a 64-63 win. The Lions began 2010 well, beating American by a 10-point margin on Jan. 2, but they could not defeat North Carolina State in Raleigh soon after. They came close to downing their Atlantic Coast Conference foe but ended up on the wrong end of a 60-58 score. Lomax and then-junior guard Kathleen Barry had impressive performances in the near-upset. After all was said and done, the Light Blue had achieved a program record of nine Division I nonconference wins. The team continued to perform impressively in Ivy League play. A 68-44 win over Cornell in Ithaca and a 68-47 success against the Big Red at home (in which Lomax totaled 30 points and then-sophomore guard Melissa Shafer added 12 off the bench) were followed by a disappointing 73-55 defeat to Harvard. The Lions rebounded by notching wins on the road against Dartmouth and Brown, but their progress was halted when they fell to Yale and Princeton the following weekend. The campaign saw the Light Blue complete sweeps of the Big Green, the Bears, and the Quakers, but the team was unable to find a single win against the Tigers or the Crimson. The Lions almost edged out Harvard in their second encounter, but fell to a narrow 69-67 defeat. The Quakers' visit to Columbia saw four Lions score in the double figures in a 71-58 triumph, and the match in Philadelphia saw the Lions come home with an even more impressive 80-61 win. The 80 points racked up by the offense that night marked the most points the Lions scored in any game last season. Lomax excelled in a 72-59 win over Dartmouth in Hanover, scoring 26 points and managing 16 rebounds, and Columbia completed the sweep in Levien Gymnasium with a 66-59 overtime win. Columbia closed its campaign in fine fashion, defeating Yale and Brown at home to achieve the Lions' first weekend sweep of the season. The 64-47 win over the Bulldogs secured the Lions their best Ivy record in program history, as well as their first conference finish with a win percentage over .500. In the season finale, the Lions beat Brown 54-41 to earn a third-place finish in the Ivy League. Soon after the season ended, Lomax—an All-American honorable mention and the 2009-2010 Ivy League Player of the Year—signed a training contract with the WNBA's Connecticut Sun, forfeiting her final semester of NCAA eligibility and giving the Lions the tough task of replacing her.