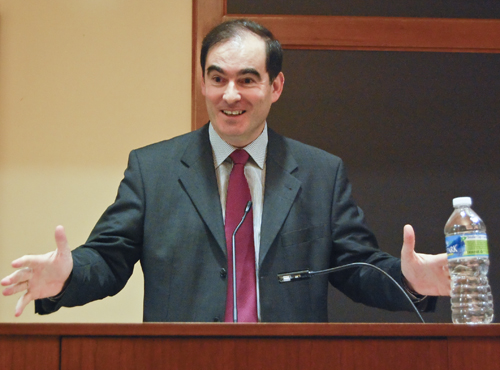 John Ging spoke at Barnard Sunday night, without sponsorship from the group that organized the talk.

John Ging, director of the United Nations Relief and Works Agency, took the stage Sunday night at Barnard—but he did so without the sponsorship of the student group that helped to organize the event. Just Peace, a self-described "pro-Israel, pro-Palestine, pro-peace" student organization affiliated with Columbia/Barnard Hillel, pulled its sponsorship of the event after Hillel voiced concerns about controversial statements Ging had made regarding the conflict in the Gaza Strip. Ging, who spoke about the plight of Palestinian refugees in the Gaza Strip to a full audience at Barnard's Held Auditorium, has been criticized for biases favoring Palestine and mischaracterizing Hamas. "There was a lot of back-and-forth. ... Discussions went on for about a week," said Abby Backer, BC '13 and president of Just Peace. "There just wasn't time to find a solution. We dissociated ourselves from the event so we wouldn't have to dissociate ourselves from Hillel." Jonah Liben, GS and Israel coordinator for Hillel, said that he would have supported the event if Hillel could control the format, but representatives from Just Peace said they wanted Ging to have the opportunity to deliver an uncensored speech. Backer said she also heard concerns that the conversation might spiral out of control in an unproductive way. "It's unfortunate that this event couldn't happen with Hillel's name on it," Liben said—and both he and Backer said that time constraints, and not fundamental disagreements, prevented the two groups from reaching a compromise. Referring to the national Jewish organization that supported Ging's trip to the United States, where he is visiting a number of campuses, Liben added, "We know that J Street isn't bringing Ging in to bash Israel, and he tried to contextualize his statements [but] Ging is a controversial speaker." The event was ultimately sponsored by six organizations, including the Columbia University Democrats, the School of International and Public Affairs' Arab Student Association, and the Institute for the Study of Human Rights. Critics protesting at the event handed out fliers alleging that Ging has supported aid groups with links to terrorism, though Ging said during a Q-and-A session that he has repeatedly been misquoted and misrepresented. Ging—who at the U.N. works to provide aid, health care, and education to Palestinian refugees living in the Gaza Strip—spoke about conditions in the region, at times pleading for a resolution of the conflict. "I believe a solution will be found. ... The thing that cannot be changed are the lives that are lost in the meantime as people cease to believe that this day will ever come." A moderator attempted to maintain order during the audience question session, but speakers at times spoke over each other, some raising concerns about the legality of Israel's blockade of Gaza and flotillas that attempt to deliver supplies to the region. "These events need to happen, but this event was too free," Eric Lawrence, a student in the joint General Studies-Jewish Theological Seminary program, said after the event, adding that he wished there had been more of a structure. Liben said he wanted to hear a more substantive, nuanced discussion. "Such an emotional conflict evokes non-intellectual responses, which are unfortunately quite polarizing." The debate continued after the program ended, with audience members talking in the auditorium for more than 45 minutes after the talk. While some said they recognized that Ging had attempted to facilitate a balanced discussion, others said they left unsatisfied. "I don't feel he fully answered or directly commented on my comments," said Sarah Wellington, an activist who was handing out fliers for U.S. to Gaza, an organization that supports sending an American boat to Gaza. "I think he found a very nice way to not be pro or con." news@columbiaspectator.com CORRECTION: An earlier version of this story stated that Just Peace had pulled its sponsorship of this event due to its own concerns. In fact, the group did so due to Hillel's concerns.