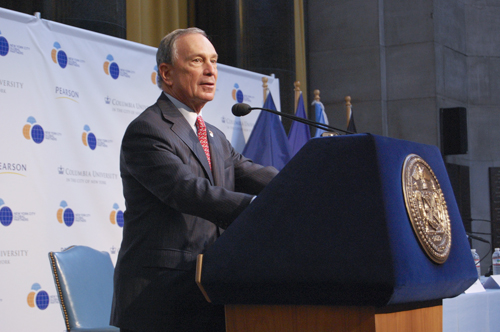 Mayor Michael Bloomberg's childhood teachers would never have imagined him making a speech on education reform. "I was the student who made the top half possible," Bloomberg joked, referring to his academic performance. The mayor spoke Thursday morning at Columbia as part of a three-day conference held by New York City Global Partners. A slew of high-level education officials gathered in Low Library to propose reform strategies and programmatic solutions to improve urban school systems. The conference bought together educational officials from Delhi, Shanghai, Singapore, Jerusalem, Helsinki, and Rio de Janeiro. "We need better public schools for all children. If we don't get that, we all suffer," Bloomberg said in his speech. New York City's education system has been considered one of the worst in America, he said, adding that his predecessors took an important step by increasing mayoral control of schools. "I came in during the right time." The public school system, he added, has improved from its negative reputation to one that President Barack Obama touts as a model for other U.S. cities. Global Partners President Meyer Feldberg, who gave welcoming remarks, said that focusing on graduates is key. "Each year, the graduation rate is getting better, which is important in order to help the city move forward. We need K-12 to get to this success," he said, adding that the graduation rate has increased by 43 percent in the past five years. Bloomberg said that the economy and the city's demographics are the two challenges facing the public school system—which he anticipates will expand with a growing urban population. "The majority of people are city dwellers. ... By 2050, three-fourths of the people on earth are expected to live in a city." Exploring innovative teaching methods, examining the success of others who have graduated from the system, and finding new ways to prepare students for the demand of college are all important steps, he said. "We just have to be willing to try new things." Bloomberg said that since he and Joel Klein, CC '67 and outgoing New York City schools chancellor, have been in office, they have closed schools that were not working, given principals a chance to try new strategies while holding them accountable, and created academically challenging charter schools. Despite progress, "There are more than one-third of students that don't complete high school," Bloomberg said. University President Lee Bollinger discussed education problems on a larger scale in his speech. "We rarely consider how globalization affects children's education," he said, adding that Columbia has been developing resources for addressing the complexity of a more globalized world in areas like climate change, disease, and health. Students in attendance had mixed feelings about the mayor's talk. "He did not ignore the fact that we still have a long ways to go and that compared to other countries we are still struggling," said Allison Ton-Yunger, a first-year student at the School of Social Work. But Annie Tan, CC '11 and a New York City public school graduate, said Bloomberg might have taken too much credit for some of the progress the city has made. "Not all gains can be attributed to his department, although many of them are," she said. news@columbiaspectator.com