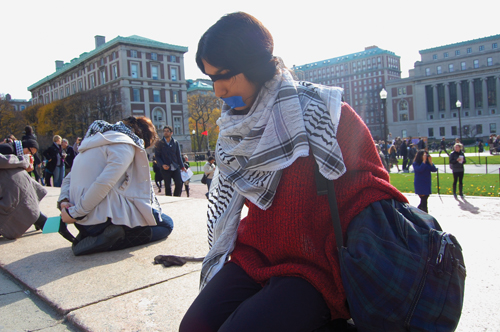 Students dressed as Israeli soldiers stopped other students, ordered them to the ground, and blindfolded them in a demonstration that drew multiple campus groups to a standoff on College Walk Thursday afternoon.

The Columbia Students for Justice in Palestine set up mock checkpoints—to resemble those manned by the Israeli army in the West Bank—drawing crowds and counter-protests for several hours.

Organizers from CSJP said the demonstration was meant to protest human rights violations at these checkpoints, while representatives from pro-Israel groups argued that the event was offensive and the checkpoints are a needed form of protection.

Four groups under the Columbia/Barnard Hillel, the umbrella organization for Jewish student life, set up camp opposite CSJP on the sundial and distributed fliers telling passersby that checkpoints were a necessary evil and a product of a complicated relationship.

"Our gut reaction was to show up with suicide belts and say, See this is why we have checkpoints'," said Jonah Liben, GS/JTS '11 and Hillel's Israel coordinator. "We did not want to stoop to that level of evocative anger."

Dina Zbeidy, GSAS and a member of CSJP, who marched around Low Plaza with army garb and a cardboard gun, said she spent most of her life on the other side of an AK-47.

"I had to go to a checkpoint every day for two years, so I know how they act usually," she said, explaining that she lived on the Arab side of West Jerusalem and always dreaded the hour-and-a-half security check, where she would be shoved and yelled at.

Lior Hemi, GS, who donned an Israeli flag in protest of the checkpoint, questioned the methods behind the protest.

"I think it's fair to do demonstrations, I think it's important, but a lot of the time it's one-sided," he said. "How is it going to enhance my cause to show the other side's satanic side? Is that really going to make me look better? I don't think so."

Yasmeen Ar-Rayani, CC '12 and one of the organizers of the CSJP event, said the focus of the event was on violations of human rights, not political debates.

"The point is to be talking to people who don't know that much. I'd rather not talk to people, especially Zionists, who are distorting the truth or approaching me aggressively," she said.

After the second round of mock security checks, a loud argument broke out in the middle of College Walk between the supporters and critics of Israel.

Ravi Bhalla, CC '13, said he was happy to see such a spirited debate, even though he said both sides seemed to focus on minutiae.

"I think they're both a little too animated," he said of the students who threw around expletives and references to lethal explosives. "That said, it is incredibly interesting. I'm really happy to see this kind of stuff going on. There's obviously stuff both clubs could probably do to make the situation better."

Eric Schorr, GS/JTS '12 and vice president of LionPAC, a pro-Israel group, said on behalf of his organization that he was incredibly offended by the mock checkpoints.

"They [CSJP] held a radical demonstration distorting the reality of what happens at checkpoints in the West Bank," he said, adding that not everyone who passes through a checkpoint is treated so roughly.

Still, Alaa Milbes, GSAS and a member of CSJP, said their goal was clear—to "portray what Palestinian students go through on a daily basis."

Sarah Sleeter, BC '12 and a member of LionPAC, said the club was disappointed that CSJP went ahead with the demonstration before informing Hillel.

"We agree also that the checkpoints are a sad thing, an unfortunate necessity. But instead of coming to talk to us, they decided to do a demonstration like this," she said.

Representatives from both groups said they were displeased that the other did not want to engage in dialogue.

"The other side is not open to communication, so I am upset about that," Schorr said.

Check out Spectator's footage of the demonstrations here: http://vimeo.com/16985492

An earlier version of this article spelled Yasmeen Ar-Rayani differently. She prefers the corrected spelling.