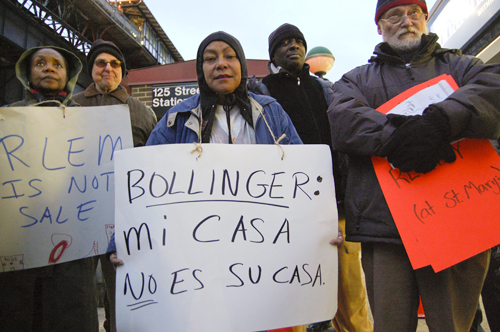 West Harlem residents and members of the Coalition to Preserve Community braved a 30-degree chill Tuesday afternoon and assembled outside the University's Employment Information Center on 125th Street to protest Columbia's employment practices. "The Columbia expansion plan was approved in part because they indicated they would be providing jobs and that the community would be given priority for those jobs," said Ruth Eisenberg, one of the founders of CPC. "Instead of providing jobs, they provide employment offices that do not provide jobs." The Employment Information Center opened five years ago in West Harlem with the intention of providing career services to community members. The University released a press release Tuesday, outlining the services that the center provides, including live training workshops, online training programs, one-on-one counseling, and referral services. But CPC members say these services are not being provided and allege that the University has failed to provide statistics on the number of referrals made by the office. "How are you ever going to know whether the University is meeting the promise on which approval of its project was based if they're not forthright about the jobs they provide?" Eisenberg asked. Columbia said that the center has hired over 900 local residents, in a wide range of jobs since it opened. "Columbia is a major employer in New York City and specifically Upper Manhattan. Its workforce is highly diverse in socioeconomic background and professional experience," the statement read, adding that the University awarded 68 percent of the project area's construction contracts to minority-, women-, or locally-owned firms, from August 2008 through September 2010. Approximately 30 protesters, many carrying signs criticizing Columbia, chanting "Harlem is not for sale." Neighborhood resident Lestor Perto said he was encouraged by the initiative. "If nobody says nothing, nothing will happen." Harlem resident Joan Fernandez said she was skeptical that there were real opportunities available through Columbia. "I've seen a lot of community newspapers that advertise job training but not Columbia," she said. "Maybe they're helping their graduates, but not us." Linda Burton, a 40-year-old mother making $7.25 an hour, said she has little luck at the office. "I would love to see the day when I could make $10 an hour. I would love to have a better job." Burton was among a number of protestors who had been to the employment office. "They were nice—they tried to help me, or at least they pretended to," she said. But she was not placed in a job, and the only time she heard back from Columbia was when it called her for a five-minute survey evaluating the University's services. "I felt that I was ignored." The protest also drew Columbia students, who said that there are groups on campus who are receptive to residents' demands and feel that the job center should be made more effective. "The University is behaving like a corporation, which is unacceptable," Pavi Mehta, CC '11, said. "It's really neighbors evicting neighbors." Lindsey Cornum, CC '11, volunteered at the protest by making posters and distributing fliers. On the issue of the expansion and the local job market, Cornum said Columbia needs to be held accountable, and that students are instrumental to those efforts. "Columbia does have a community to answer to," she said. "Once you attack people's livelihood, it's hard to keep them quiet." news@columbiaspectator.com