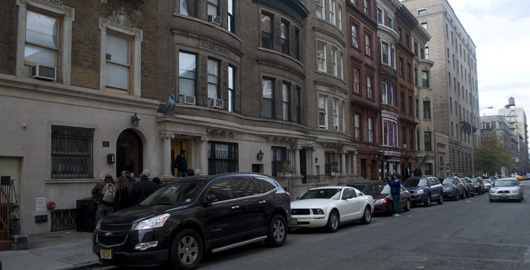 The Alpha Epsilon Pi, Pi Kappa Alpha, and Psi Upsilon fraternities were placed on interim suspension Wednesday night after the arrests on Tuesday of several members who allegedly sold illegal drugs from their 114th Street brownstones. Dean of Student Affairs Kevin Shollenberger announced in a statement that the three fraternities had been instructed to cease all activities—including recruitment, initiation, and social events—pending further review. "According to Columbia's Fraternity and Sorority Life Community Standards and Greek Judicial Board Handbook, a fraternity or sorority can be suspended if determined 'necessary to promote the best interest' of the chapter and the University," Shollenberger said. "Given the severity of the alleged behavior, we believe these interim suspensions are in the best interest of our community at this time." He added that the national chapters of each fraternity had been notified. The interim suspension comes after five students were arrested in an on-campus police raid Tuesday morning. Harrison David, SEAS '12, Chris Coles, CC '12, Adam Klein, CC '12, Jose Stephan Perez (known as Stephan Vincenzo), CC '12, and Michael Wymbs, SEAS '11, were charged with selling cocaine, marijuana, MDMA, Adderall, and LSD, according to the New York City Special Narcotics Prosecutor's Office. David lived in Alpha Epsilon Pi, Perez in Pi Kappa Alpha, and Klein in Psi Upsilon. Wymbs had been involved in Psi Upsilon pledging this semester. All five men pleaded not guilty. Dean of Community Development and Multicultural Affairs Terry Martinez will conduct an internal review of the three fraternities and of the Intercultural House, where Coles allegedly sold marijuana. "We plan to work closely with student leaders, the fraternity and sorority community (including national organizations), and the ICH to assess the scope of the problem and what reforms may be necessary to address these issues," Shollenberger said. Representatives of the three fraternities declined to comment on the suspension. A statement from the Inter-Greek Council, signed by the incoming presidents, said it is standard practice for members of the Greek community to refuse to speak publicly about internal matters. "As we have throughout the years, we continue to have an open dialogue and partnership with Columbia administrators," the statement said. "The Division of Student Affairs has issued a statement announcing an interim suspension of the three fraternal organizations and will initiate an internal review of these chapters as well as the Intercultural House." A statement released earlier on Wednesday, signed by the current and incoming presidents of the Inter-Greek Council—the governing board of all fraternities and sororities at the Columbia—distanced the Greek community from the students arrested. "The IGC and its chapters do not tolerate illicit activities such as this. Engaging in criminal activity directly opposes the values of our individual chapters, our national organizations, and the overall mission of the Greek community nationwide," the statement said. "These alleged crimes involve individual members of our campus community who are also members of fraternities. These actions are not an accurate reflection of the Greek community's values." The charters for each of the fraternities remained intact as of Wednesday night. Mark Williams, executive director of the International Office of Psi Upsilon, said on Tuesday that his office planned to have a representative on campus Wednesday to speak with fraternity members. Kevin Puhlmann, GS, said he was not surprised that Columbia suspended the fraternities. "The frats did something and Columbia is obligated to react," Puhlmann said. "Columbia has a plan, and they have to protect that plan from chaos. If Columbia didn't do anything, it would reflect on them poorly. That would be them implicitly saying it's OK." Correction: An earlier version of this article misattributed an IGC statement to the IFC and did not include the correct authors of the statement within IGC. Spectator regrets the errors. news@columbiaspectator.com