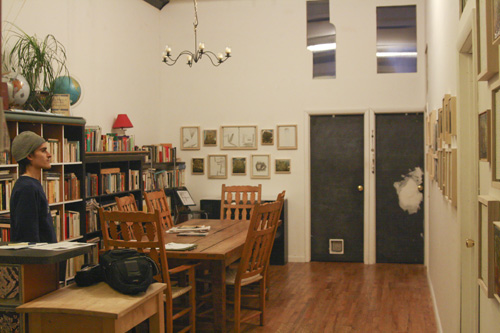 Paul DAgostino stands in his art gallery, Centotto, which doubles as a main living space of his apartment.

Underneath the seemingly desolate landscape of warehouses in Bushwick, something is brewing. On the surface, a visitor to the neighborhood might pick up on the quantity and diversity of street art. But in order to truly experience the richness of Bushwick's growing art scene, one has to ring some buzzers and travel down some dimly lit hallways. Those who take the initiative are well-rewarded by cutting-edge art in unconventional environments. Factory Fresh (1053 Flushing Ave., Brooklyn) brings a thriving Brooklyn street art scene into the gallery setting. Opening Friday is "Speedy Wonderland," which showcases two contemporary artists who make colorful, cartoon-like works of pop art. In his woodprints, Polish artist Roman Klonek draws his inspiration from old Eastern European cartoons. He places his wide-eyed cast of characters in various predicaments in pieces that are both humorous and slightly disturbing. German artist Jim Avignon's work contains a similar graphic sensibility that he has applied to designs on nightclub walls, wristwatches, and airplane tails. His characters are sly and emotive, and he places them in scenes that often contain biting social commentary. The show remains on view until Jan. 16. Paul D'Agostino, an Italian professor at CUNY Brooklyn College, works as a curator for small shows that he sets up in his apartment gallery known as Centotto (250 Moore St. #108, Brooklyn). You might have to sidestep some bicycles while entering, and the artwork inhabits the same space as his kitchen, dining room table, and book collection. The current show, "Marksmen and the Palimpsests," on view until Dec. 17, features two artists who employ unique painting processes and work with a great deal of precision. John Avelluto makes acrylic paintings in which he imaginatively plays with the image of lined notebook paper. His mark-making is astonishingly precise—lines, pencil markings, erasures, and white-out marks are so realistic that the viewer is tricked into believing that he uses those actual media rather than paint. Josh Willis's paintings depict a variety of permutations on the Tower of Babel image, which he arrives at through successive applications and scrapings of oil paint. Regina Rex ( 17-17 Troutman St. #329, Brooklyn) occupies one room on the third story of a warehouse in the northern reaches of Bushwick. The gallery was established in May of this year by a collective of 13 Brooklyn artists. "We [Regina Rex artists] show elsewhere, and here, we show people who we think deserve attention," Yevgeniya Baras, a member of the collective, said. The pieces in the current show examine the relationship between surface, history, and memory. Takashi Horisaki's sculpture "Social Dress Buffalo" is a colorful, dome-like structure made of latex skins cast from the exteriors of abandoned houses. The diverse textures on the skins speak to the powerful processes of decay and forgetting and to the intense personal connections people feel toward familiar surfaces. Klea McKenna's "Cherish" series presents a series of destroyed photographs taken from the wreckage of burned-down houses. Like Horisaki's piece, the photographs contain fascinating textures and call on us to contemplate the forgotten stories and memories. The show remains on view until Dec. 19. English Kills (114 Forrest St. #1, Brooklyn) is a more conventional gallery than Factory Fresh, Centotto, and Regina Rex. However, like the others, it has a distinctive charm. Visitors enter through an alleyway, and much of the interior plumbing is exposed, creating a gritty aesthetic well-suited to showing Brooklyn-based artists. Currently on display through Jan. 9 is Andy Piedilato, whose large paintings toy with viewers' perceptions of spatial reality. The surfaces in the paintings, many of which are marked with a brick-like pattern, maintain a tangible appearance but bend and warp in contradictory directions. He uses a variety of brushstroke types to create abstract environments that straddle the line between order and cacophony, simultaneously giving the viewer the sensations of excitement and unease. Bushwick is nearly an hour away from Morningside Heights on the subway, but it is an essential destination for anyone interested in a bit of an adventure and an opportunity to see some of the city's most exciting artwork in interesting and intimate environments. You will definitely have more of a story to tell than you would taking the 1 train down to the Museum of Modern Art.