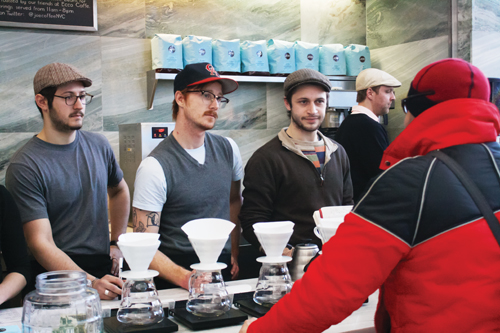 Columbia's coffee fanatics are expected to fill the Northwest Corner building today as Joe the Art of Coffee makes its debut on campus. The coffeehouse, more commonly known as Joe Coffee, opens at 8 a.m. in the Northwest Corner Building at Broadway and 120th Street—and students said they're glad to have another place to caffeinate. "Finally, we have good coffee on this campus," Diane Jean-Mary, CC '13, said. "There can never too many coffee places in any area. I'm just glad it's Joe's and not another Blue Java or a Starbucks." Caroline Casey, BC '12, said, "The coffee places we have fill up rapidly around peak times, so I don't think there are enough coffee places in the area where you can have meetings or just sit down and talk with friends." Joe, widely acclaimed for its coffee brewed by the cup, will open in the airy cafe space in the Northwest Corner Building and also serve donuts and pastries. Its biggest impact may be increased foot traffic in the Northwest building, which officially opened last December. "It will give me an opportunity to get a look inside the building that I probably would never have seen otherwise," Jean-Mary said. "Also, there really isn't much up on 120th to cater to those sleepy SEAS students and science majors." Joe owner Jonathan Rubinstein, who said he had wanted to open a location nearby "ever since I can remember," added that students are his ideal clientele. "We have had great success being right by NYU and the New School, and we have found students and faculty to be especially interested in sustainability, all things culinary, and, of course, to need caffeine to get through the day," he said. The staff at Brad's café next to the Journalism building didn't think that Joe's opening would greatly affect their business, alluding to the difference between the two locations. Sarah Vanhovel, an employee at Brad's, said that the convenience of Brad's will still attract students. "We offer really fast service, and we know that students are in a rush. We have it set up this way to expedite things, so hopefully that is our advantage," she said. Steven Hall, a public relations representative for the restaurant group that owns Brad's, said in an email that they welcome Joe to the neighborhood. "We feel we have a strong clientele who loves our product and that Joe opening won't affect business at all," he said. With respect to other coffee establishments, Joe manager Jessica Bertin said that the new coffee shop's concern will be quality, not speed. "Not everyone needs a hand-crafted beverage. Our customers are just willing to wait the extra minute," she said. Regardless, Rubinstein said the campus could easily support more retail. "It's New York City, so there are enough people per square inch that there could be a place in every corner and they would do well," he said. "Three blocks away is a whole other world here." The process of getting Joe into the Northwest Corner building started in August, when Rubinstein said the company began working on its proposal to the University. "We have been setting up, planning, hiring, and training for about two months now," he said. But the idea for a location near Columbia had originated long before that. "We used to walk Broadway and Amsterdam monthly looking for a storefront and could never find anything. When this opportunity came about, we jumped," he said. Columbia facilities spokesperson Dan Held issued a statement last month explaining why the University chose Joe to fill the space in the new building, citing the chain's local roots. "Joe is a New York City-based, family-run business with a reputation as one of the best coffee places in the city. Its critically acclaimed, sustainable, direct-trade coffee and light breakfast, lunch and dinner fare will help meet the needs of the University and local community," Held said. Since Joe is not affiliated with the campus food service program, students won't be able to use dining dollars. This week, Joe will only take cash, but according to Bertin they will probably start accepting credit cards within the next week, and may accept Flex in the future. constance.boozer@columbiaspectator.com