At least 8 percent CC, SEAS get straight As

At least 8 percent CC, SEAS get straight As 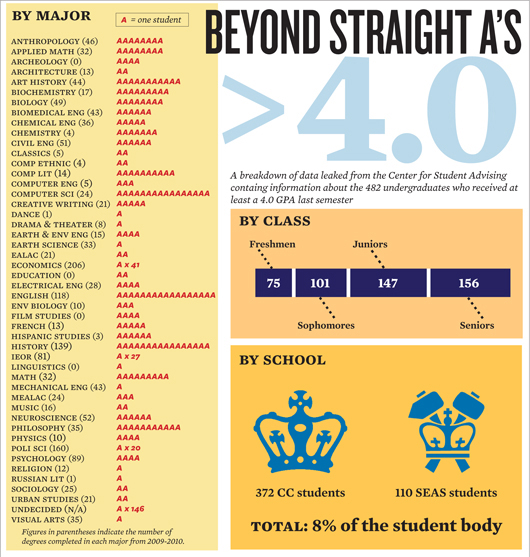 At least 8 percent of Columbia's 5,934 undergraduates received straight As or A-pluses last semester, according to a document leaked to Spectator on Wednesday. The spreadsheet, which was leaked from an advising dean to his advisees in an apparent email gaffe, listed 482 students in Columbia College and the School of Engineering and Applied Science who received at least a 4.0 during the fall 2010 semester. The spreadsheet included students' names, GPAs, UNIs, years, the names of their academic advisors, and majors. According to the document, 372 of the students were in CC and 110 were in SEAS. Spectator verified information with several students on the list. The document also indicates that the more senior the class, the more straight As reported. The highest number came from the class of 2011, which had 156 students on the list, followed by the class of 2012 with 147, the class of 2013 with 101, and the class of 2014 with 75. Two students had 4.33 GPAs, which means that they earned grades of A-plus in each of their classes last semester. A plurality of the students listed are "undecided" on a major. However, of the students who have declared majors, those majoring in economics form the largest bloc, with 39 students. That category encompasses all of the economics majors, including students participating in joint degree programs with mathematics, operations research, philosophy, political science, and statistics. It was followed by political science with 20 students, and then English with 17 students. Mechanical engineering, a relatively large department in SEAS that 43 students majored in, last May, only had one student make above a 4.0. Several students who received the email said they were not worried about their GPAs being released because of the relatively low number of students who received the list as an accidental attachment from their adviser. "I am not particularly concerned with others knowing my GPA for last semester. If GPA actually meant something, then maybe I would be," Justin Vlasits, CC '11, wrote in an email. "As it is, there are really no grounds for complaint." Sarah Ferguson, CC '11, said she also did not have any hard feelings about the error. "I'm not much bothered by 'the leak.' It was clearly a mistake, and I can't imagine anything coming of it," Ferguson wrote in an email. "To me, it just was further proof of huge grade inflation." abby.mitchell@columbiaspectator.com