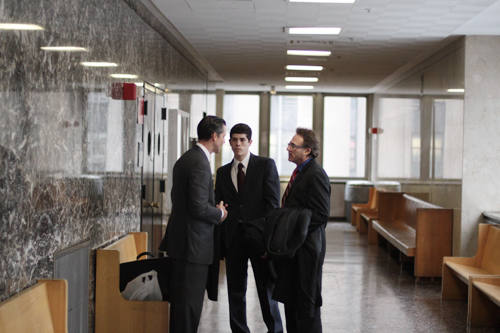 Harrison David, SEAS '12, who was arrested last month for selling drugs, will seek a plea bargain that does not include jail time, his attorney said Tuesday. David is one of five students who were arrested in an on-campus police raid last month and charged with selling cocaine, marijuana, MDMA, Adderall, and LSD, according to the New York City Special Narcotics Prosecutor's Office. David is the only one accused of selling cocaine. David's attorney, Matthew Myers, said a jail cell would be wasted on his client. While emphasizing that the allegations against David have not yet been proven, he said that David now understands that he cannot return to dealing. "If the prosecutors feel as though some sort of period of jail would be appropriate—I just don't see what purpose that would serve," Myers said. "I think Harrison David has learned his lesson more than the average person." Myers said David has been suspended but not expelled from Columbia, and that he is taking the situation "very seriously." He added that David is making plans to apply to other schools, as it is likely Columbia will expel him if he is convicted. "I don't want to put words in his mouth. It's certainly a huge disappointment in light of the fact that he was able to gain acceptance into one of the best schools in the country, and now it's in jeopardy," Myers said. Columbia will not comment on Harrison's status at the University in accordance with the Family Educational Rights and Privacy Act, which restricts educational institutions from releasing information about students. Myers said that David is currently living in Florida with a former captain in the New York State Department of Correctional Services who is a family friend. Myers said this is meant to give David a disciplined environment to help him "get back on the right track." David said in an email to Spectator that he has been in touch with friends from home and school while in Florida. "I'm happy here, just trying to move forward with my life, make some money and I'm probably looking to transfer schools," David said in the email. Myers noted that David's father did not pay his son's bail until two weeks after his arrest in an attempt to teach him a "hard-love lesson." "His father, along with counsel, thought that it may serve to deter future conduct, and that the situation was not to be treated lightly," Myers said. "But of course the Department of Corrections is no place for a kid like Harrison David, so at some point we did the safe thing and bailed him out." Myers would not estimate the likelihood of David receiving a plea bargain that does not involve jail time. He said that the media attention surrounding the case—which the Special Narcotics Prosecutor's Office dubbed "Operation Ivy League"—puts more pressure on prosecutors to seek jail time. "They tend to let public perception get into their wheelhouse," Myers said. "The bargains always involve higher jail sentences when you have the press lurking around in courtrooms." David has been charged with a Class A2 felony for selling cocaine, a crime that generally calls for a sentence of three to eight years, Myers said. The other defendants—Coles, Adam Klein, CC '12, Jose Stephan Perez, CC '12, and Michael Wymbs, SEAS '11—have been charged with less serious offenses. The five students are next due in court on March 1. sammy.roth@columbiaspectator.com