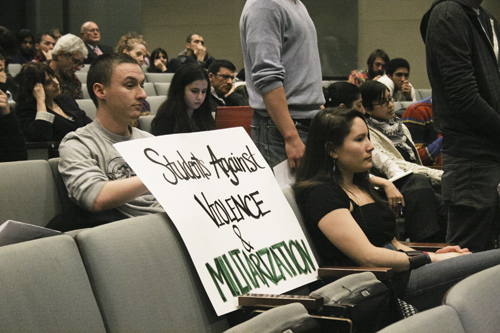 The military's "don't ask, don't tell" policy may be on its way out, but a slight majority of speakers at a University Senate-sponsored town hall on Monday night said the Reserve Officers' Training Corps should not be invited back to Columbia. About 40 people spoke at the town hall, 21 of them against a potential ROTC return. There were about to 100 people in attendance. ROTC opponents discussed issues ranging from the military's policy excluding transgender individuals, to abuse of women in the military, to general disapproval of military action. Many students argued that Columbia should not engage with the military because it has taken part in immoral wars, including those in Iraq and Afghanistan, and disproportionately recruits disadvantaged individuals. Malena Arnaud, BC '11, was part of a group of students that brought a sign reading "The military preys on low-income communities." "The problems with the military haven't disappeared, haven't changed in two years, and haven't changed in 40 years since the '60s, when students also didn't want it on campus," Arnaud told Spectator after the town hall. A group of veterans, most of whom are currently enrolled in the School of General Studies and Columbia graduate schools, defended the military and ROTC. Michael Zapata, a business school student who spent more than nine years in the Navy, said that bringing ROTC to Columbia would help create a better-educated military leadership, an argument echoed by many ROTC supporters. He said this would end up allaying the concerns of many ROTC opponents. "The way to make a change is from the inside," Zapata said. "And having ROTC here allows you to impact potential future leaders of the military." James Applegate, an astronomy professor and member of the University Senate's Task Force on Military Engagement, has been vocal in the past about his belief that the repeal of DADT would end most student opposition to ROTC. "I think in particular some of the anti-ROTC groups have never really talked to the veterans," Applegate said. "I think the veterans run into some of the stereotypical anti-military attitudes a lot." Other ROTC opponents said that the military's policy of excluding transgender individuals violates the University's non-discrimination policy. Avi Edelman, CC '11 and president of Everyone Allied Against Homophobia, said that while "a lot of the rhetoric has made it seem like the repeal of 'don't ask, don't tell'" has eliminated all military discrimination, Columbia should not invite ROTC back until the military allows transgender individuals to enlist. "I think it's a really tough decision but it's the right one, and our University has a history of being able to make those tough calls," Edelman said. The town hall was the first in a series of three sponsored by the University Senate's task force. The task force plans to summarize campus and alumni opinion, as revealed by the town halls, poll all undergraduates and certain graduate students, and present a report to the full University Senate on March 4. The University Senate last put together a task force in 2005, which resulted in a 53-10 senate vote, with five abstentions, against a resolution that called for an ROTC program to be established on campus as soon as possible. Currently students can participate in an off-campus ROTC program at Fordham University, but Columbia has not hosted its own ROTC program since the 1960s. The task force was started in December, in the wake of Congress' repeal of "don't ask, don't tell," which had prevented gays from serving openly in the military. DADT had dominated the campus debate on ROTC in 2008, but there were few mentions of it on Monday night. Learned Foote, CC '11 and president of the Columbia College Student Council, spoke in favor of inviting ROTC back. He said that while the event was characterized by "very civil discourse," he did not like that anyone could make a claim "without it being fact-checked." "I think there were a lot of things that were said that were not true, and I would hope that when the task force makes its recommendations, that they consider both the feelings that were expressed today, and also the facts," Foote said. Jose Robledo, GS, a University senator, and ROTC cadet said that while the town hall was "a lot more civilized" than ROTC discussions in years past, he was disappointed by the arguments that were made. "For the most part, a lot of intellectual arguments that a University of this caliber is supposed to have were not had here," Robledo said. "A lot of those arguments [from the town hall] are regurgitations of popular rhetoric, and that was easily seen by how quickly the point-counterpoint went." The second and third town halls will take place Feb. 15 and Feb. 23. The University Senate is expected to vote in April on whether to invite ROTC back to campus. An earlier version of this article miscounted the number of speakers against ROTC as 22. There were 21 speakers who articulated a position against ROTC. Spectator regrets this error. sammy.roth@columbiaspectator.com