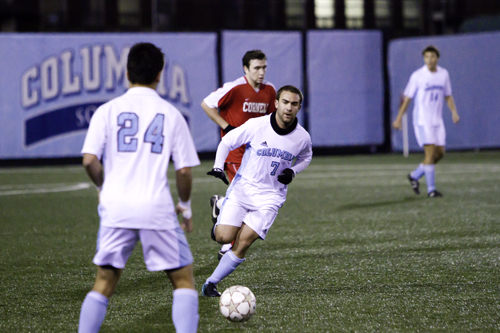 The Sporting Kansas City have shown interest in senior midfielder Peppe Carotenuto, inviting him to its training camp to be held later this month.

People always talk about the jump from collegiate to professional sports, and how often it's really done. Judie Lomax and Sophie Reiser both joined the big time in recent years after representing the Light Blue, and now the Lions may be able to boast of a third star. Columbia College senior Peppe Carotenuto completed his fourth season for the men's soccer team in November, and his talent has been spotted by Sporting Kansas City (formerly the Kansas City Wizards). The Arizona native has been invited to the Major League Soccer outfit's training camp, which runs from Feb. 19 to 27. Carotenuto's best was hidden from Lions fans, as he was constantly hampered by nagging injuries during his time here. However, when he played, he certainly did make an impact with his creativity, especially on those around him. He earned all-Ivy honorable mention as a sophomore, and contributed to the team with his playmaking ability. He captained the Light Blue for two years with his central midfield partner, junior Mike Mazzullo. "My first memory of Peppe is his goal against Cornell in 2008, my freshman year," Mazzullo said. "He scored a half-volley from about 18 yards out, and it was a great goal. It was the last game of the season, and we ended the season on a good note with a 2-0 win." "It's wonderful that he's getting this opportunity, and I'm glad for him that he's healthy," he continued, "At Columbia his health has hampered his playing ability, we've seen moments of his skill and his talent and I'm glad he's got this chance now to show what he's made of when he's healthy." Mazzullo, who alone will captain the Lions as a senior, highlighted the gifts Carotenuto possesses—both as a player and a leader. "He's a very intelligent player and technically solid," he said. "He's simple on the ball but a very gifted playmaker. He rarely loses the ball, and he has great vision. Overall, his strength is his soccer mind—where he plays his passes, his positioning, and his tempo. He's very knowledgeable about the game, knows a lot about tactics, conditioning, and drills, so it's helpful to have a leader who really knows the game, and that's his biggest strength as a leader." Carotenuto himself was thrilled simply to have the opportunity, and likened it to already realizing his dreams. "Even though playing professionally is the ultimate dream, just to kick a ball around or train with professional athletes is really close to the dream coming true," he said. The senior narrowly missed out on an invitation to the MLS pre-draft combine, but that did not deter his efforts. "I never really went on vacation after our season ended, and I continued training in the hope of getting called," he said. "And when the call came, I didn't even think about if I had any papers or exam during that week, I just said yes." So how exactly did the team approach Carotenuto? "I get a phone call while I was eating dinner in John Jay from an unknown number, and it's funny because I usually never answer calls from numbers I don't know," he said. "This time I did, and it was John Pascarella, one of the assistant coaches for Sporting Kansas City. I ran outside into the cold in just my T-shirt, and it was a short, sharp, sweet invite to the training camp, and he gave me all the details." The club has special meaning for Carotenuto as his older brother, Franco, is on the roster. "My older brother has always been my best friend growing up, and one can only imagine what it would mean to achieve such a great honor with your best friend, but he's also my brother," he said. "Two brothers playing on the same team sounds like a fairytale or a Hollywood story, but it would really be unbelievable to be playing together at such a high level. At home we always practice together, and help improve each other—it's teamwork, and to have that at the highest level would be surreal." Carotenuto firmly believes that his recent injury-stricken past is behind him. "Right now I am at the best I can possibly be. I feel like I have the playing fitness, and the only way I could be better was if I had been training with professional athletes in the past two months," he said. "Other than that, I'm in the best shape of my life." The call may have raised some eyebrows, but not those of Lions head coach Kevin Anderson. "I think this is something that we've been talking to KC about for a while, actually," he said. "They watched Pep the entire season, and they have been consistently in the picture. They've liked him for a period of time, so even though the announcement came as a surprise to everybody else, for us it was just a question of how they were going to do it." Anderson hopes for the very best for his former midfielder, and praised his excellent work ethic and determination. "He's positioned himself extremely well to be graduating in a few months with a pre-med degree from Columbia and also to have an opportunity to play in the MLS, and it's what he walked onto the campus for four years ago," Anderson said. "He's preparing well, training hard, and he's put in a lot of time and effort since the end of the season to keep himself in shape. I'm optimistic for him, he'll go out there and do his best, and I hope that what he puts on the table is what they're looking for."