College dean speaks out in favor of ROTC

College dean speaks out in favor of ROTC 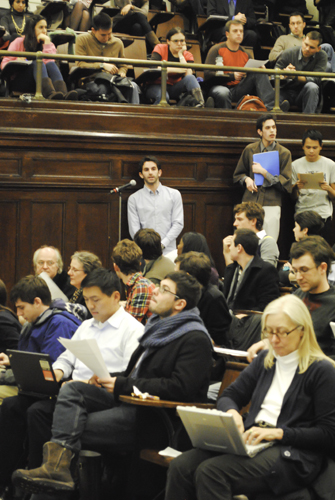 Columbia College Dean Michele Moody-Adams said that she came to Tuesday night's ROTC debate wearing three different hats—those of Columbia administrator, moral philosopher, and former advocate for ROTC at Cornell University. But the dean's metaphor, from her opening address to a town hall focused on the Reserve Officers' Training Corps presence on campus, did little to join a room entrenched in two distinct camps. The town hall was the second in a series of three sponsored by the University Senate's task force on military engagement, which aims to gauge student opinion on the potential return of an on-campus ROTC program. In her opening address, Moody-Adams said that with the repeal of "don't ask, don't tell"—a federal policy that prohibited gays from serving openly in the military—the country is in a new era, and Columbia should consider finding an official place for ROTC on campus. "I invite you to consider whether the right question may no longer be 'How could we ever formally recognize ROTC on our campus,' but, instead, 'How can we not welcome them back?' Please do not shy away from this important debate," she said in closing. As in the first town hall, a slight majority of the students who volunteered to speak argued adamantly against ROTC's return, on the grounds that the military still excludes transgender individuals, targets low-income communities, and continues to participate in unjust wars. Noah Baron, CC '11, said welcoming ROTC back to campus would mean "throwing transgendered students under the bus." Before the repeal, top administrators and University senators had said DADT—which was considered a violation of the University's nondiscrimination policy—was the main issue standing in the way of a Columbia-sponsored program. Robert Shapiro, professor of political science, said he was not surprised to see concerns about the military's recruiting and overseas activities brought to the fore after DADT's repeal. "I think it was a little disingenuous for people to claim this would end with 'don't ask, don't tell'. It was easy to use 'don't ask, don't tell' as a smokescreen," he said. In her opening speech, Moody-Adams said that even if the country has not "moved as far as it could on the question of discrimination," now is the time for Columbia to help produce "citizen soldiers" who would benefit from the Core Curriculum. As a vice provost at Cornell, Moody-Adams supervised academic programming for its ROTC program, the Ivy League's largest. Her successor at Cornell, Vice Provost Ronald Seeber, wrote in an email that Moody-Adams felt an obligation to advocate for ROTC as she would any other academic program. "She most definitely performed that role with her usual competence," Seeber said. Phil Caruso, a former Cornell cadet who worked closely with Moody-Adams, wrote to Spectator from Afghanistan to say that Moody-Adams played a key role in expanding ROTC's presence at Cornell. She helped cadets secure physical education credit for their training and increased participation in the program, Caruso wrote. Several students from Lucha, a Latino activist group, and Students for Justice in Palestine said that having the dean of the college open the event with a pro-ROTC speech inserted a bias into the debate. "There is something wrong when the person with authority, the dean of Columbia College, the person who represents this institution, and spoke as the voice of the institution, begins a supposedly open debate with a biased narrative," Aarti Sethi, GSAS '15, said. Ron Mazor, CC '09, Law '12 and chair of the task force, said no one from the University senate reviewed Moody-Adams' speech beforehand, but they did make it clear that she would be the only speaker. "I do think she was able to toe the line between expressing an opinion and not closing down debate," he said, adding that he believed her presence brought many undergraduates out to the event. About 200 people attended. A couple of transgender students spoke about the discomfort they would feel on campus if ROTC became an official program. Nico Barragan, CC '13 and an ROTC air force cadet, said that it's members of the military who are made to feel uncomfortable on campus. "I try to avoid walking around campus in my uniform. I get dirty looks and people in class tell me I'm signing up to kill children to pay my tuition bills," Barragan, who is also the secretary of Columbia Queer Alliance, said. Learned Foote, CC '11 and Columbia College Student Council president, said many of the people who speak publicly about ROTC have radical opinions. "I do wonder what the median Columbia student thinks about this," he said. Barragan said he believes most Columbia students support ROTC but remain silent. "The anti-military are always gonna be the radicals. They're going to be the loudest but they're not the majority," he said. leah.greenbaum@columbiaspectator.com Correction: An earlier version of this article misidentified Robert Shapiro as James Shapiro. Spectator regrets the error. Correction: An earlier version of this article misquoted Dean Michele Moody-Adams' closing remarks. Spectator regrets the error.