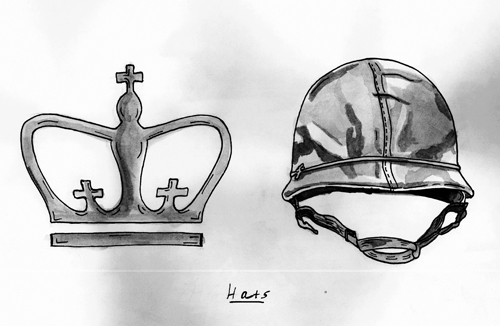 Our outpost in downtown Baghdad doesn't have many amenities. The closer you get to the center of this Iraqi metropolis, the more austere the conditions—war is chock-full of irony. We get two meals a day, no regular mail, and suffer from terribly overpriced WiFi. But life's not all bad: "Stars and Stripes" gets dropped off on occasion. Yesterday, one of my soldiers cracked open the latest issue and read for a minute before letting out a long, low whistle. "Hey, Sergeant, don't you go to Columbia?" That I do, did, will. Should have graduated with the Columbia College class of 2010 before my mobilization orders came in; hoping to fall in and graduate with CC '12 when my time is up. He continued: "Looks like your fellow students heckled a wounded Iraq vet." There was a note of snide derision in his voice and for good reason. This incident gave steam to the detractors who are happy to believe Columbia is an elitist institution stuck in 1968, removed from the national discourse, reduced to casting aspersions from the safety of our ivory tower. A convenient narrative—but completely off the mark. When students in my class learned I was a non-commissioned officer in the Army Reserves, they were shockingly respectful. Even those with an extreme opposition to the military were civil to a fault, appreciative of the honest answers I gave to their informed questions. No opinions were changed, but no insults were hurled. On an administrative level, I have encountered nothing but assistance and understanding when it came to my involvement with the military. The University's support of its student veterans has been exemplary, unparalleled among other Ivy League schools. My experience has been remarkably positive because students and the administration were able to separate the individual from the institution. Likewise, detractors of ROTC need to ensure they don't confuse the institution implementing policies with policy makers. If you just hate the military, that's one thing. You are entitled to your opinion. But don't punish the military for obeying this country's civilian leadership, as mandated by the Constitution. The military follows orders, plain and simple. If you are against the conflicts in Iraq and Afghanistan, take it up with the Commander-in-Chief; he is responsible for directing the military's actions. Particular policies of the armed forces drawing your ire? Talk to Congress; they were responsible for Don't Ask, Don't Tell and other controversial legislation. Obfuscation and incivility do nothing but weaken legitimate arguments and distract the discourse. The Columbia I know is a bastion of thought-provoking conversation, whether in the halls of Hamilton or a back table in Hungarian. This is our strength, our reality. A few rude individuals does not a majority make. Focus on the issue, and keep the conversation civil. Our military is plenty accustomed to bearing the brunt of the government's foreign policy decisions—that's kind of the point. It won't suffer at the hands of misdirected criticism. But for the sake of your argument's efficacy, seek the proper forum. The author is a student in Columbia College on military leave majoring in anthropology. He is a sergeant with the United States Forces-Iraq.