Where are the moderates?

Where are the moderates? 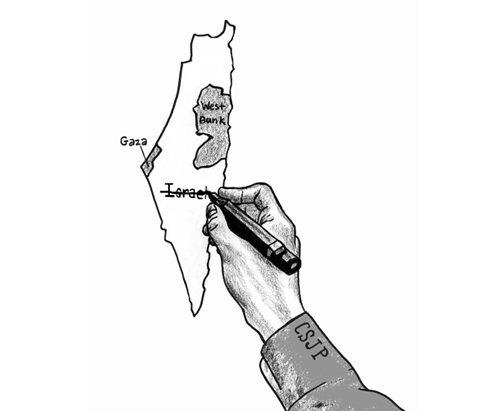 During Israeli Apartheid Week, Columbia Students for Justice in Palestine has once again offensively exploited a historical tragedy. No rational person can deny the plight of the Palestinians, and no moral person can ignore their suffering. However, labeling Israel as an apartheid state grossly distorts the Israeli-Palestinian conflict and belittles the suffering of South African apartheid victims. If Apartheid Week has proven anything, it has shown that C-SJP misrepresents the moderate majority of Palestinians and works against a peaceful two-state solution. Israel is a democratic, multi-ethnic country that upholds equal rights for all of its citizens. Minorities comprise 20 percent of Israel's population, and they enjoy the same civil liberties as any Israeli. Israeli-Arabs vote in Israel's democratic elections and hold seats in Israel's parliament. An Israeli-Arab, Salim Jubran, is a judge on Israel's Supreme Court, and other Israeli-Arabs have served as deputy speakers of the Israeli parliament. Not surprisingly, a recent poll showed that 40 percent of Israeli-Arabs living in East Jerusalem would rather relocate their homes and maintain Israeli citizenship than join a Palestinian state. In contrast to citizens of other Middle Eastern nations, Israeli-Arabs enjoy greater political freedom and opportunity in Israel than they would in any other Arab country. Unlike Israeli-Arabs, Palestinians are governed by the Palestinian National Authority (PA). Though Palestinians have substandard public services, the PA has caused much of this disparity by working harder to attack Israel than to implement effective governance. This neglect has imperiled Palestinian life and made Palestinians dependent on Israel for most services. To repair this damage, Israel has recently worked extensively with Fatah to enhance Palestinian infrastructure and autonomy. With American and Israeli help, Palestinians have cultivated a competent police force that provides basic security. Palestinian Prime Minister Salam Fayyad has worked with Israel to develop the Palestinian Ministry of Finance, leading to unprecedented GDP growth in the West Bank. Israel has not abandoned the Palestinians, and this recent cooperation will hasten Palestinian independence. Despite the incalculable benefit to Palestinians that Fayyad's work has accomplished, C-SJP wants none of it. C-SJP cares little for changing Israeli policy or for protecting human rights. If Apartheid Week were about promoting civil liberties, C-SJP would have strongly condemned Hamas—an internationally recognized terrorist organization—and its despotic regime in Gaza. Instead, its true objective is much more ominous: The elimination of the state of Israel. Beneath the guise of apartheid and the Boycott, Divestment, and Sanctions movement, C-SJP renounces the Jewish right to self-determination. Zionism is the movement of Jewish nationalism and a response to two millennia of anti-Semitism and exile; yet, C-SJP has labeled Zionism as inherently racist. By claiming that a democratic Israel cannot morally exist, CSJP undermines mainstream Palestinian thought. According to a 2009 poll, 74 percent of Palestinians and 78 percent of Israelis want a two state solution. While Prime Minister Fayyad encourages economic integration with Israel, C-SJP calls for economic boycotts. While Palestinian activists, such as Ghaith Al-Omari, aspire to have two states for two people, C-SJP calls for the end of Israel. Why does C-SJP ignore moderate Palestinians? Why do Palestinians and Israelis cooperate more often in the West Bank than we do here at Columbia? Rather than represent the fringe of Palestinian activism and creating a toxic campus environment, C-SJP should embrace the example of mainstream Palestinian and Israeli leaders who see the kinship between Zionism and Palestinian independence. Just as Israelis desperately yearn for a partner in peace, supporters of Israel on campus long for someone interested in respectful dialogue. As Matthew Jacobs wrote in the Spectator on Monday , conversation does not have to delegitimize Palestinian suffering. On the contrary, discussion must respect the dual national needs of both Palestinians and Israelis. Surely there are Palestinians on campus who hope to see a flourishing Palestinian state exist adjacent to a thriving Israel. Who stands for the Palestinian voice of moderation at Columbia? Jonathan Huberman is a sophomore in the joint General Studies and Jewish Theological Seminary program majoring in history and Jewish thought. He is the director of public relations for LionPAC.