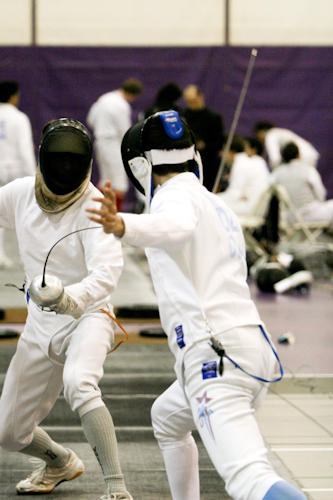 Freshman Alen Hadzic helped the Lions to an impressive finish this weekend, winning eight of his nine bouts on Friday.

Many believe that the future is very bright for Columbia fencing, but even the present hasn't been bleak. The Light Blue capped off its season by finishing in seventh place overall at the 2011 NCAA Championships at Ohio State University. Sophomore Lydia Kopecky was the standout performer for the Lions, as she earned herself All-American second team status in women's epee. Notre Dame, which had been ranked No. 1 in both men's and women's fencing since the start of the season, came home with the team title with 174 points, edging out Penn State, which had 168 and St. John's, which had 155. After the first two days of competition, Columbia was in 10th place with 40 points earned by its men's fencers. Saturday's rounds saw the women add an impressive 36 victories putting Columbia in eighth place. On Sunday, the women earned 18 more victories to finish with 94 points. Columbia finished behind Ivy League rivals Princeton, which finished fourth with 150 points, and Harvard, which had 137 points in sixth. The Light Blue finished above Penn which was eighth with 91 points. When asked if he was pleased with his team's performance, head coach George Kolombatovich said, "Absolutely, absolutely. Any time you make top 10 in the country with seventh you've got to be happy." Columbia started off slow, but improved as it adjusted to the intensity and high level of competition. Their coach wasn't surprised by this. He said, "There is a certain point in every sport where you're tense. You get to a certain point and say 'I'm not doing that well so I might as well go out and try some things. Let me just relax and go out and try to have some fun.' It's a liberating thing when you're losing." The most striking example of this was freshman Alen Hadzic in men's epee. Hadzic started slow on the first day of competition, finishing Thursday with a record of 5-9, putting him in 19th place. He responded extremely well on Friday by winning eight of his nine bouts to finish in ninth place with 13 victories. "Alen is a very competitive person. He was not at all happy about his performance on the first day," Kolombatovich said. "I think Alen just said 'The hell with this. I'm just going to go out there and just do it and make it happen,' and he certainly did." Like Hadzic, freshmen foilists Alex Pensler and Bo Charles struggled early on in the competition but finished on a high note. On Friday, Pensler won six of nine bouts to finish with 13 victories and Charles won four of nine, giving him nine victories. Due to their strong second day performances Pensler finished in ninth place while Charles ended up in 15th. In men's sabre, freshman Mel Rodriguez finished in 22nd place. On the women's side, junior co-captain Sammy Roberts finished in 11th place and sophomore Loweye Diedro finished 12th in sabre. Roberts started slow but finished Saturday with nine victories in 14 bouts. She finished the competition with 12 victories. Diedro struggled out of the gate with five victories on Saturday but finished the competition with 11. In women's epee, Kopecky finished in a tie for seventh place while freshman Katya English finished 18th. Kopecky was the Lions' top finisher at NCAA's. Kopecky and English finished Saturday with records of 8-6 and 7-7, respectively. Kopecky had a solid record of 5-4 on Sunday while English notched three victories in nine bouts. In women's foil, sophomore D'Meca Homer finished in 19th place. In addition to Kopecky's All-American recognition, Roberts, Diedro, Pensler, and Hadzic return to New York as honorable mention All-Americans. This experience at nationals will yield benefits down the road for Columbia fencing. Kolombatovich said, "I expect a great majority to be here at NCAAs again next year when we go down to San Antonio. What they went through here, the intensity of it, the experience they have not only will they benefit but they will even help their teammates perform better. We are going to have a far more experienced team. I'm looking forward to the next couple of years."