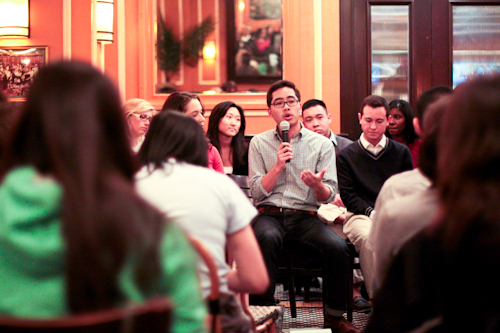 Three parties vying for positions on CCSC's executive board went toe-to-toe on Thursday night at a candidates forum hosted by Spectator. Questions about how candidates would allocate funds, respond to controversial events, and manage party policy revealed divisions between the parties—CU Charge, UniteCU, and Better Columbia. Andrew Nguyen, CC '12 and UniteCU's candidate for president, emphasized the diversity and experience of his ticket. Candidates for Better Columbia, a ticket of mostly newcomers led by Barry Weinberg, CC '12 for president, said they have the fresh ideas and drive incumbents may lack. Aki Terasaki, CC '12, said his ticket, CU Charge, is uniquely qualified for the executive board because they combine the advantages of Unite CU and Better Columbia. "Forget the study breaks and think large-scale programming where we can actually make and grow Columbia's sense of community," Nguyen, current VP of policy, said. His party platform includes a proposal for a two-day Homecoming carnival that would include a bonfire and Ferris wheel. Wilfred Chan, CC '13, a Spectrum daily editor and candidate for VP of student life, disagreed with the proposal to do away with study breaks and lower-level programming. "Every single club I joined freshman year was because I went to a study break," Chan said, adding that he disagrees with UniteCU's call for a large-scale event. "I love Ferris wheels. They're great, but they cost 10, 12K for two days ... That could fund 20 student groups." Chan added that he would plan low-budget events like campuswide pillow fights and beach days on Low Steps. Terasaki said his party would prefer to allocate more of CCSC's money to governing boards, so it can be distributed to groups to plan more of their own events. When asked about whether or not Columbia's party scene is in danger following the suspension of several fraternities last month, each party said CCSC should plan more alcohol-free events. Brandon Christophe, CC '12, currently the VP of finance, a member of Sigma Phi Epsilon, and UniteCU's candidate for VP of finance, said that CCSC should support the Greek community. "We're just not going to be having late-night ragers in Lerner. There's just too much red tape—though I'd love for that to happen," Christophe said. Weinberg said Better Columbia wants to create "party events" to make it easier for student groups to plan parties and gatherings, with or without alcohol. Candidates from all three parties expressed a desire to make CCSC more transparent. First-year Varun Char, Better Columbia's VP of communications candidate, suggested rotating the council's meeting location by using dorm lounges and potentially requesting space from the Intercultural Resource Center. "People don't know where it's happening and when it's happening," Char said. Steele Sternberg, CC '13 and Better Columbia's candidate for VP of communications, noted that the CCSC finance website has not been updated in 318 days. Ryan Cho, CC '13 VP of policy candidate for CU Charge, explained that a lot of students are unaware of the range of issues CCSC influences. He said they intend to have weekly office hours and publish CCSC's budget if elected, in addition to reaching out more to students. After briefly describing their platforms, candidates answered questions posed by audience members, readers of Spectrum, and Spectator. "I'm most satisfied about the fact that even if my ticket is not elected, my presence here has made the issue of sustainability something to be talked about," said Elizabeth Kipp-Giusti, CC '12, current CU Green Umbrella board member and candidate for Unite CU. news@columbiaspectator.com