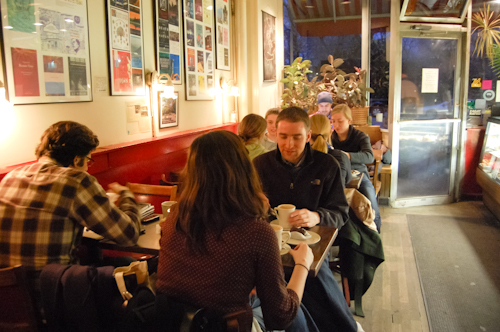 Author Nathan Englander started getting his coffee at the Hungarian Pastry Shop in 1992. Nineteen years later, you can still find him at one of the shop's wooden tables. Such customer loyalty has made it possible for the Pastry Shop—known for its bohemian crowd of students, professors, and a few notable authors—to celebrate its 50th anniversary with 50-cent pastries and coffee on April 20. The celebration also marks the tenth anniversary of the P & W Sandwich Shop, the Pastry Shop's neighbor. "I wish 'em another 50 or more. I hope to come back for the 100th anniversary," Englander said. The Pastry Shop, with its dim lighting and colorful painted menu, has become a Morningside Heights institution in its half-century on Amsterdam Avenue between 110th and 111th streets. Uday Dhar, a painter who lives in the neighborhood, has frequented the shop since he began his undergraduate studies at Columbia in 1975, when the now-Chinese restaurant Columbia Cottage down the street served Hungarian food. Dhar has been a daily patron—often, a twice-daily patron—since the Biniorises took over the shop. Sitting at a table covered with a few postcard-sized canvases, some small paint jars, the remains of a peach Danish, and a copy of that day's New York Times, he gestures to the tables and chairs set up in front of the shop. "The folks here are just so supportive of the community," Dhar said of the Pastry Shop's owners. "There's a guy that comes in here every morning. I don't think he's totally homeless, but he doesn't work obviously, and he's a little mentally challenged. As kind of a nice gesture, he'll sometimes set up the tables outside so the staff doesn't have to do it, and in exchange they'll give him coffee and a croissant. It's a nice thing." Mitchell Cohen, a professor of political science at CUNY, remembers coming to the shop while working on his Ph.D at Columbia in 1974. As co-editor of the political journal Dissent, Cohen used to meet with writers and other editors at the Pastry Shop. "I've stayed here many long hours. You can see some of my books in the frames up there," Cohen said, gesturing to the walls where his book covers join those of Englander, who was named one of the New Yorker's "20 Writers for the 21st Century" and worked on both of his published novels at the shop. A Mr. and Mrs. Vecony opened the shop in 1961 and sold it to Panagiotis Binioris, along with two partners, 15 years later. Panagiotis, who sometimes goes by Peter, now co-owns the shop with his wife, Wendy, both of whom are Greek. The Pastry Shop has been central to their lives since 1976—and was even responsible for their romance in the first place. The Biniorises met when Wendy moved up north after graduating from the University of Florida to live with family members who were regulars of the shop. She got a job as a waitress there, and "they somehow picked each other," their 24-year-old son, Philip Binioris, said. Philip has been working at the Pastry Shop on and off since he was 13. Now a full-time employee, he plans to keep the business in the family. "We'll be here," he said. "Probably for my generation. We'll be around for a while." One of the shop's charms, Philip said, is that it hasn't changed much, including the recipes for the pastries—from chocolate éclairs to apple strudel and walnut hamentaschen—prepared daily by three bakers. "We've gotten new refrigerators and new coffee machines as they break down. Other than that, when they came in 1976, they put in the floor, and basically built out this café space, and that's how it's been since," Philip said. But the shop also attracts the younger set, even without providing the connectivity students often expect at a coffee shop. "We don't have Internet still, probably won't have Internet as long as possible, and no outlets, so without it being a library it's an intimate environment to do your work," Philip said. Marlies De Munck, a Ph.D student from Belgium, said the atmosphere reminds him of cafés in Europe. "In other places in New York you feel like you're being chased out," he said. Philip called the experience of spending time in the café as "a little magic trick" of having personal experiences in a public place. "People come in and they feel like they've been here before, even if they haven't. And if they have, they remember. You come back and you see it the way it was when you were here, and if you were a student, you remember where you sat. That chair is still there, and when you sit in it, it feels the same, and the coffee tastes the same, and the croissant tastes the same," he said. The celebration plans for the official anniversary are flexible. Wendy hopes some old waitresses will come back, or authors will come to read passages and make toasts. "I think it'll be very organic," she said. The owners' explanation for why the Pastry Shop has become a sentimental spot for many Morningside Heights residents is a similar one. "College is a strange time for a lot of people, a lot of changing going on, a lot of growth," Philip said. "If you can come back and find something kind of stable from that period in your life, even if it's not college, even if it's just when you were living in this neighborhood, you were passing through, to find something that consistent is rare." Gina Lee contributed reporting. melanie.broder@columbiaspectator.com