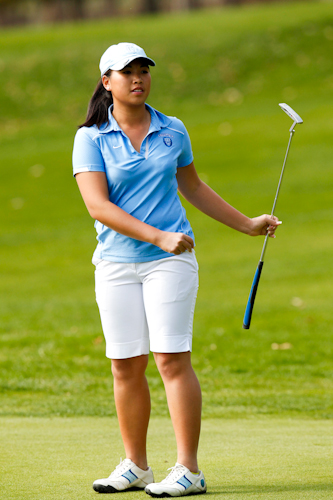 Columbia's men's and women's golf teams put forth impressive showings at the Ivy League Championships, but Yale took top honors in both competitions this weekend. Individually, three Lions took home all-Ivy honors. Freshman Michelle Piyapattra ran away with the individual title for the women, posting an exceptional two-under-par aggregate score over the three days. Her score was 10 strokes ahead of the next best competitor, Harvard's Mia Kabasakalis. Head coach Kari Williams knew that Piyapattra was ready from the moment she arrived at Atlantic City Country Club. "She was incredibly steady," Williams said of the freshman. "I think that from the second shot of the practice round, she was very comfortable with the golf course." Although no other competitor was able to break par for the weekend, Piyapattra said she felt the course did not present too many challenges. "I felt pretty comfortable with the course," Piyapattra told Ivy League Sports. "It wasn't that long, and I had really good ball striking this weekend." Going into the final round, Piyapattra had a sizable six-stroke advantage, but she knew the good weather on the final day would produce a number of low scores. "Since it was better weather, I knew the scores would be much lower than they were before, so I really tried to get out there and get after it," Piyapattra said. Piyapattra posted the best score in each of the first two rounds (a 72 and 73), and her final-round 69 was only bested by 68 from Princeton's Rachel Blum. Par-5s were key in Piyapattra's success, as she went seven-under par on those holes throughout the course of the weekend. This was Piyapattra's third tournament victory of the season. Her top finish also gave her the chance to compete in a Monday qualifier at the LPGA ShopRite Classic, which will take place on May 30. Despite Piyapattra's strong performance this weekend, the Lions finished fifth as a team, but improved by 20 strokes from the second to the third round. Junior Robin Lee tallied six birdies on the closing day, and was a large part of the reason for that day's success. The men began the weekend slowly, finishing the first day in sixth place. Despite the apparent struggles, head coach Rich Mueller and the team knew that they would experience a slow start, as it had been a trend all season. "Our first rounds all year have not been our best rounds. "Mueller said. "We all knew that that was going to be the case. We knew how it was going to go. The only thing that went wrong with our plan was that Yale played out of their minds [in the final round]." Each round saw the Lions improve, as they shaved twelve strokes off in the second round and another five on the final day. Mueller felt the teams' poor performance on the Par 5s was the biggest factor in the way they played. Although Mueller made sure to note that no excuses should be made, there can be no ignoring the role that luck played in the Lions performance on the first day. "It's a very tough golf course, and the weather can make it even more difficult, and we had a little bit of bad luck on the first day," Mueller said. The early tee time proved to be too much for the Lions in the first round, as they would face temperatures around 40 degrees. Junior Brendan Doyle was the only Columbia golfer to break 80 in a first round that pitted the Light Blue against windy, blisteringly cold weather conditions. Doyle, who shot a 74, finished the tournament in third place, giving him first team all-Ivy honors. Senior Clark Granum completed his fourth and final Ivy League Championship in a tie for seventh, giving him second team all-Ivy. This was Granum's fourth consecutive all-Ivy honor, making him the first golfer in Columbia history to achieve such a feat. Despite beginning the second round in sixth place, the Lions finished in second place as a team. "I'm just so proud of our team and the way they fought back, I couldn't be happier for Brendan and Clark, and really all of the guys," Mueller said. While difficult weather may have sealed the fates of both Columbia golf teams, both coaches had very positive outlooks for the coming years. "Having an Ivy champion in the first year means that we've got three more years with Michelle," Williams said. "Everybody played every tournament this year, so we have a ton of experience coming back." Coach Mueller also noted the importance of the returning players, but also noted the impact of the departures of two seniors who played integral roles in making Columbia golf successful—Clark Granum and Justin Lee. "Both Justin and Clark have left such an important mark on our program," Mueller said. "Every kid that comes into this program is not replaceable, you just get new players." Both teams appear eager to start the next season, and they each show strong promise for the years to come.