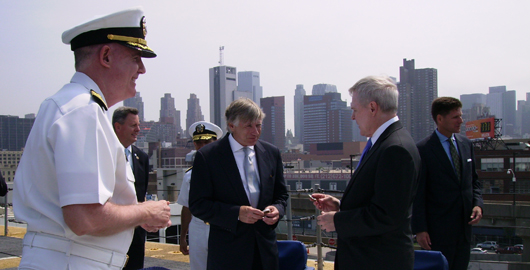 University President Lee Bollinger signed an agreement with Secretary of the Navy Ray Mabus atop the flight deck of the USS Iwo Jima Thursday morning, officially recognizing a Naval ROTC program on campus. A small audience of military veterans, students, and uniformed naval officers observed the ceremony. The Reserve Officers' Training Corps has not been recognized by Columbia since Vietnam War protests incited the suspension of the University's NROTC program in 1969. Bollinger repeated his assertion that an NROTC program will produce "an even more invaluable forum" for intellectual discovery at the University. "This offers a new era of a great relationship between universities like ours and armed forces," Bollinger told Spectator. "We are rebuilding that relationship." Bollinger's signature was the latest step in the University's recognition of ROTC following a campus-wide debate this spring semester. The University Senate voted overwhelmingly to support the program's return after the military's "Don't Ask, Don't Tell" policy was repealed by Congress in December. Secretary of the Navy Ray Mabus said that ROTC's presence on campus will generate more conversation between individuals of various walks of life. "Having Navy and Marine officers on campus will give Columbia University students a chance to interact with the military in a way they hadn't before," Mabus said. "And this will give ROTC members a much greater opportunity in terms of what they can learn." Columbia's new NROTC program will allow cadets to attend military training programs through a consortium at the State University of New York Maritime College in the Bronx, where the cadets will earn Columbia credit for their work. While Columbia does not currently have any NROTC cadets, nine Columbia students participated in New York area units in the last academic year. Columbia Business School, SIPA student and Marine veteran N. Rudy Rickner said that a campus ROTC will reduce the chance of a national division between military and civil populations. "There is a risk of a military developing a coterie of officers that has less in common with the population it is serving," Rickner said. "There is a risk that those two populations won't understand each other or be adversarial." Dean of General Studies Peter Awn said that the NROTC program will encourage the development of higher learning in the military. "If I'm going to see people in the military making serious decisions, I want to see well educated people," Awn said. "I want to see people who are liberal-minded, who have had to engage different ideas at a young age, people with broad-based educations." Army veteran and School of General Studies student Jose Robledo, who oversees training for all ROTC cadets in Manhattan, said that he anticipates Columbia's decision will produce a "domino effect." He said that he is hopeful that other U.S. universities will follow the examples of schools that have invited ROTC back to their campuses, such as Yale and Stanford. "The goal is to have universities that turned their backs on the military to reevaluate that stance," he said. Mabus said that Columbia's recognition of NROTC opens an opportunity to enable discussion between cadets and those not engaged in the military. "With exposure comes understanding," Mabus said. news@columbiaspectator.com