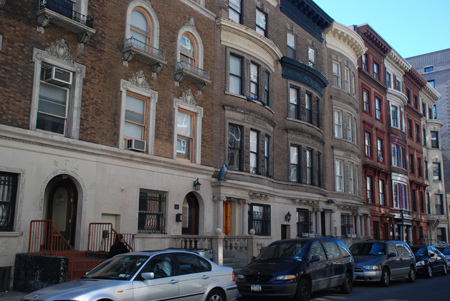 Today Housing released living arrangements for all transfer students where transfers, in addition to the usual housing options, were offered rooms from at least two all three of the vacated brownstones from the drug bust and from University Apartment housing. Multiple transfers say they have received housing from Psi Upsilon, Pike, and AEPi, as well as at 536 W. 114th St., which used to be the brownstone of the old Columbia fraternity Phi Epsilon Pi. An ongoing transfer student Facebook thread has indicated that transfers have received an assortment of Housing options including Broadway singles, Claremont singles, McBain doubles, EC doubles, Wallach doubles, Schapiro doubles, and Psi Upsilon doubles. In addition, seniors received an email from Housing today notifying them of an opportunity to transfer into one and two bedroom apartments on 113th and 114th St. similar to those of Watt. Of the sample floorplans Housing released, there is an 889-square-feet, two-bedroom apartment with a living room and dining room next to Ruggles as well as rooms near Nussbaum and Riverside Dr. No word yet on how many total rooms Housing is opening up for interested seniors. The deadline for seniors to apply for these special housing options is Aug 5 and they will be notified if they received one of the University Apartment options by Aug 12. Priority is first awarded by the day the application is received (meaning if you want to be the first ones considered you have roughly six hours to send something in) followed by reverse lottery number (Housing will favor 2,885 over 52). We have contacted Housing and will update the post later. Check after the jump for the email sent out to seniors. Spec's Finn Vigeland and Abigail Fisch contributed reporting.more

Dear Seniors, For a limited time, Columbia Housing is offering a special housing opportunity for seniors who will be living on campus this academic year. Interested seniors may be able to transfer into one and two bedroom apartments on 113th and 114th streets. These apartments are similar to those in Watt, but are generally more spacious and have some upgraded features. Please view the sample floor plans (http://housingservices.columbia.edu/seniors) for additional information about the various apartment layouts. Interested seniors should email the Housing team at housing@columbia.edu as soon as possible indicating that they are interested and who they would want to be assigned with in a two-bedroom apartment or one-bedroom double. Students must respond by Friday, August 5 at 9:00 am to be considered, and will be notified by Friday, August 12 if they have received a transfer.  Assignments will be made based on the day the application has been received, followed by reverse lottery number. If you are comfortable with your current fall assignment, please disregard this message. Regards, Columbia Housing