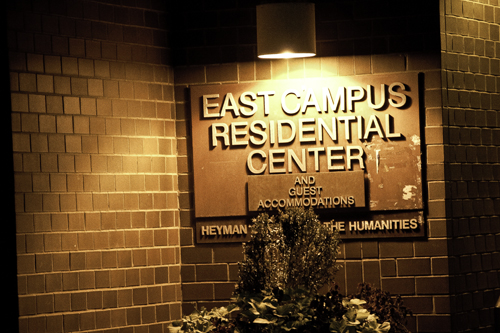 Despite promises last spring for entryway turnstiles for the East Campus residence hall, residents found themselves in a familiar spot last weekend: waiting outside EC's crowded lobby to sign in friends and get back into their rooms. In April, the Engineering Student Council announced that Student and Administrative Services had agreed to install three turnstiles in EC's notoriously congested lobby during the summer. But according to Scott Wright, vice president for SAS, the project was postponed a year due to delays in acquiring construction permits from the city. "We were putting doors in, but because there are so many people living in EC, it was a test to see the exact compliance needs," Wright said. "That's something that you submit and need feedback. It just ended up taking more time than typical housing projects would take." The proposed changes to the entryway were part of an effort to reduce crowding and long lines that block the only entrance to the building, a popular party destination for students on weekends. According to Wright, EC will get turnstiles, but they will not be installed until the summer of 2012. Before the decision to postpone the project was made, the administration considered doing the construction over winter break. However, Wright and others decided that the three-week winter vacation was not enough time to complete major changes to the entryway. "We thought 'gee whiz,' this is not the place you want to have construction going on during the school year," Wright said. According to city building department records, the University was granted a permit for construction in the lobby of EC on August 29, 2011. Several EC residents said they supported the changes and expressed frustrations that the renovations had not been completed as promised. "I think it was a good idea, and it would've sped things up," said Mikail Kamal, SEAS '12. "You might think that it's not that long, it's just 30 seconds or a minute, but after a while it adds up." East Campus' Graduate Hall Director Mollie Taxe has only lived in the building for a short time, but she said she was already eager for the changes to be made. "I would love for it to go through, even though I haven't lived here long," Taxe said. Emily Sellinger, CC '12, was not surprised by the setback. "It's annoying, but knowing Columbia administration it's not that surprising," she said. But for Jeremy Spencer, SEAS '13, the other improvements to EC over the summer, such as building-wide Wi-Fi, compensated for the delay. "It would have been nice if they had the turnstile thing done, because it's a hassle when you're coming in and there are parties going on. It would've made it faster to sign people in," Spencer, who has lived in EC for two years, said. "At least we got Wi-Fi though; at least they're doing something." jackie.carrero@columbiaspectator.com