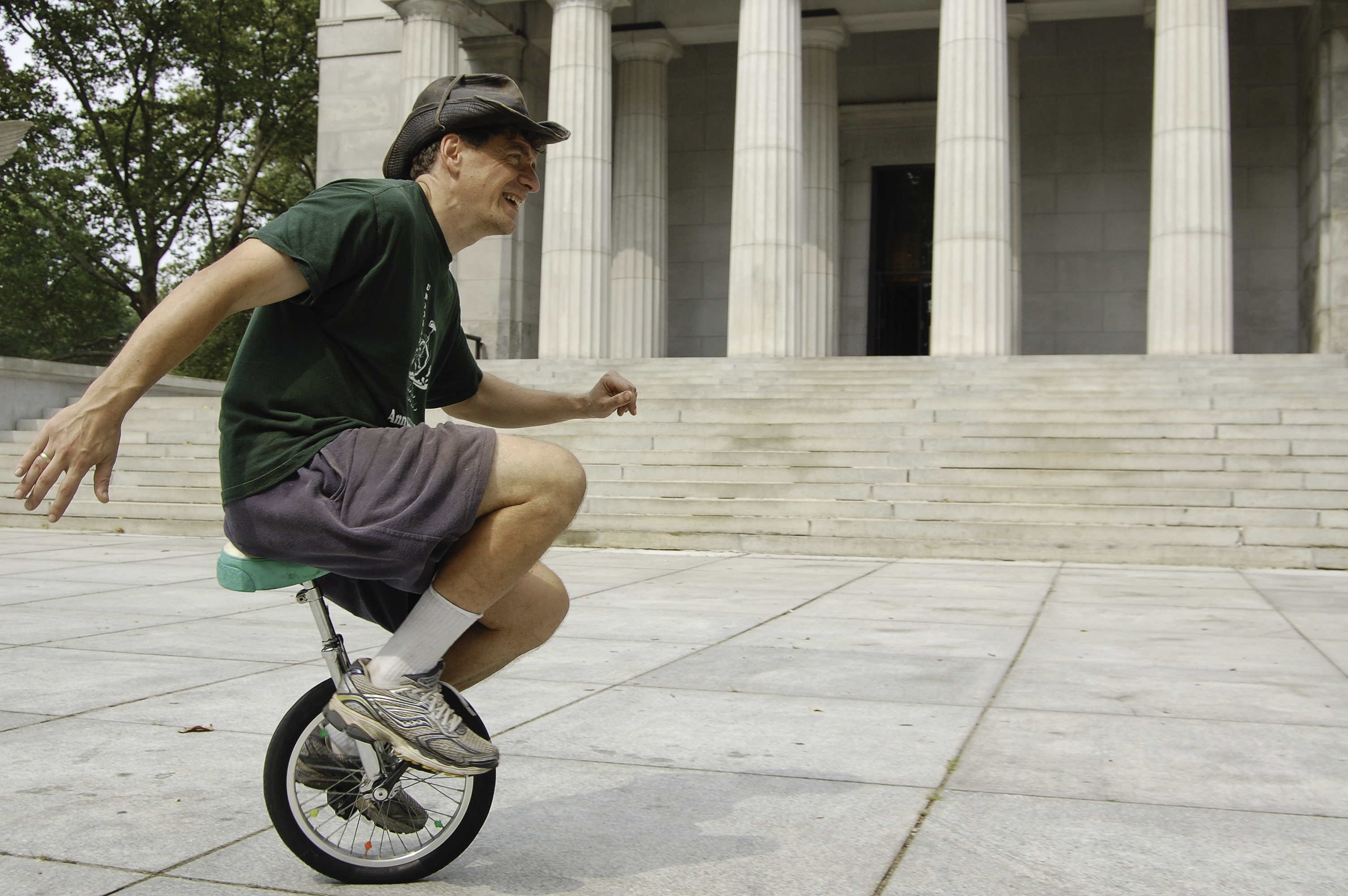 Jeff Chamblee, CC '87, was having a tough time teaching his son to ride a bicycle. So he decided to show the six-year-old that they could both learn something new. To make his son more comfortable on two wheels, Chamblee decided to take on a less common mode of transportation: unicycling. That was three years ago. Now, Chamblee rides his unicycle around his Baltimore neighborhood on a regular basis, even unicycling to pick up his son from school. Other unicyclists are hard to find in Maryland, but Chamblee said he was able to connect with more than 100 riders who share his passion for unicycling at Grant's Tomb on Sunday afternoon. It was a one-wheeler's paradise at the Morningside Heights event, the culmination of the second annual New York City Unicycle Festival. Attendees from all across the United States and of all different skill levels came to Riverside Park to display their best tricks, show off their unicycles of various shapes and sizes, and help each other improve their riding. "That's one of the things about unicyclists," said Chamblee. "They're so rare that people go out of their way to help each other, to teach one another new tricks, and to support each other." Keith Nelson, who organized the event, said the three-day festival allows an often dispersed community of one-wheelers to come together. "I'm used to seeing the whole array of folks centered around what the rest of the world might think is odd," he said. Most festival attendees, like Chamblee, a software engineer, consider it just a hobby. But Nelson, a circus entertainer who has been riding for three years, is one of the few who unicycle as a career. Kaseem Alamudeen, 27, has been unicycling nearly his entire life and is a member of the King Charles Troupe (KCT), a unicycle basketball team that specializes in razzle-dazzle dunks, passing, and acrobatics, similar to the Harlem Globetrotters. Members of the KCT, originally founded in the South Bronx during the late 1960s, were at Grant's Tomb Sunday for some casual riding. While lighthearted fun is certainly important to the KCT, unicycle basketball is more than that. It is a sport that has kept many impoverished urban youth off the streets. "It is a lifestyle," said Alamudeen. "This is the tool we use to spread a positive message." The KCT had a large influence on Calvin Wright, 56, who has been unicycling for 41 years and grew up in New York admiring the team. Wright believes events like the NYC Unicycle Festival promote a sense of fun and camaraderie essential to unicycling. "Unicycling reminds me of being a kid," Wright said. "Rolling down the sidewalk or the street, it's like I'm growing up again." Sunday's event at Grant's Tomb coincided with the semi-monthly meeting of the New York Unicycle Club, an organization of over 350 members dedicated to recreational unicycling, said founder David Stone. A 14-mile unicycle ride from Manhattan over the Brooklyn Bridge and to Coney Island was the highlight of the weekend. The International Unicycling Federation World Games was held Saturday, pitting the KCT against the 10-time world champs from Puerto Rico. KCT fell short 37-36, but Alamudeen says there's no bad blood between the two teams. news@columbiaspectator.com