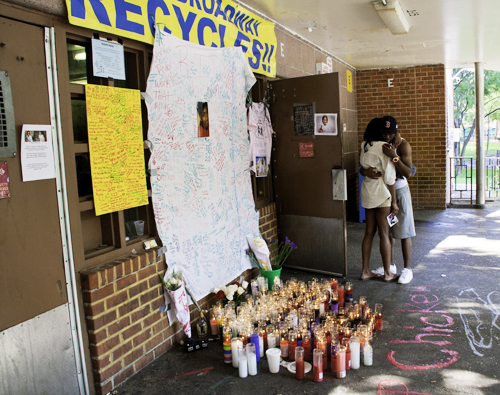 Neighbors remained stunned on Monday following the violent death of a high school basketball star at the General Grant Houses this weekend. Eighteen-year-old Tayshana Murphy was a student at Murry Bergtraum High School and a nationally-ranked point guard. She was fatally shot early Sunday morning in the building of the 125th Street housing development where she lived. Nicknamed "Chicken," she was well-known by residents who described her as a beloved friend and legendary basketball player as they gathered at a memorial in front of her building. "She was a beautiful person," said her friend, Erica Pierce. "All she did was go to school and play ball. She just wanted to get her mother out of the projects, out of the hood, period." According to friends and family, Murphy dreamed of playing for the WNBA. Murphy's player profile on ESPN described her crossover dribble as "straight from the playgrounds of New York City," and called her "one of the best in the girls' game today." Police said that Murphy's death may be a flash point in an "ongoing dispute" between youths from two housing projects—Grant Houses, south of 125th Street, and the neighboring Manhattanville Houses, north of 126th Street. According to Jason Harper, a spokesperson for West Harlem and Morningside Heights' 26th precinct, Murphy is believed to have been involved in an assault that took place two hours before the shooting. Harper said that skirmishes between a Grant Houses "youth crew" known as Three Stacks and a similar Manhattanville Houses group calling itself Make Something Happen have been creating violence around the two housing developments for months. Harper said that Murphy's death may have been linked to the perception that she was associated with Three Stacks. "I work here and I see fights every day," Grant Houses employee Joel Montalvo said. "They're fighting Manhattanville versus Grant, over stupidness, because they just wanna be better. They're just kids, teenagers." Harper confirmed that Murphy was with a 17-year-old associate and was accosted by two individuals in their 20s described as black males. Police have not yet named a suspect, but, according to official reports, Murphy was shot once in the head shortly after 4 a.m. as she ran from an assailant who chased her to the fourth floor of her building. According to witnesses, Murphy pleaded for her life and claimed that the assailants had the wrong person before she was shot. Two days later, candles light up a photo of the basketball star and a poster of written sentiments from friends and family. Resident Arianna Gangadeen, who has known Murphy since she was two years old, stood next to the memorial on Monday. Gangadeen was awake Sunday when she heard the yelling outside the building. "People were running outside and yelling out loud, crying and crying," she said. "Chicken got shot, Chicken got shot.' I couldn't stop crying. I loved her." daphne.chen@columbiaspectator.com