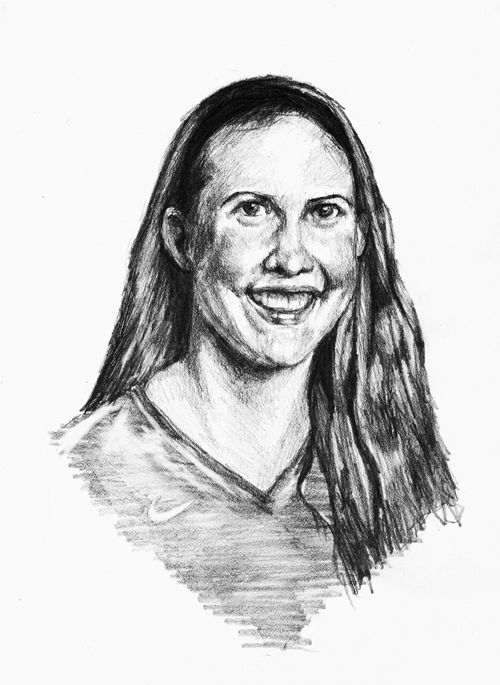 In Charlee Dyroff's closet, she has two different sets of volleyball uniforms: one for the red Utes and the other for the blue Lions. It seems like Dyroff, a transfer sophomore libero from the University of Utah, has just launched another journey ahead of her. "I committed to University of Utah when I was seventeen as a junior at high school," Dyroff said. "Between then and freshman year at college, a lot changed. University of Utah just wasn't a fit for me." From Colorado to Utah and then to New York City, her life has been moving forward at a quick pace­—just like the volleyball games she stars in. This past weekend, the Light Blue travelled to the Art Carmichael Invitational hosted by the University of Rhode Island, and Dyroff led the Columbia defense against the hosts with 23 digs en route to a thrilling 3-2 victory. The Lions were unable to win the games that followed, but the transfer recorded a mammoth 39 digs against Boston College, setting a new single-game record for the Light Blue. Despite her strong winter sports pedigree, from a mother who was a NCAA women's skiing champion and a father who played semi-professional hockey, Dyroff chose to play on the volleyball court rather than on the ice. "Since fifth grade, I began playing volleyball with friends," Dyroff said. "Then I played for a club. I wanted something to make my own. When I was young, I liked the team aspect, and now I like how quick the games are." Dyroff started out as an outside hitter, then played as a setter, and ultimately became what she is now—a libero, a position to which she feels very much attached. "Whenever I tell people what my position is, they all ask for its pronunciation," Dyroff said. "Many times, they are confused what it is and often don't know what my position does at all." "I became a libero because everyone told me, 'You are too short for everything' except for a libero. And now I am actually really glad that I'm too short for everything." Standing 5'6'', she has experienced success throughout her illustrious career. At Boulder High School in Colorado, she earned three varsity letters in volleyball and served as the team captain during her senior year. She also played for the Juggernaut Volleyball Club and was the captain for five years in a row. She was named the team's most valuable player her senior year at Boulder, and she received two Defensive Player of the Year awards (2008, 2009). At Boulder, Dyroff still holds the season record for digs (401). At the University of Utah, she played in all 31 matches, finishing off the season with 183 digs and 17 service aces. She was also named to the 2010 Mountain West Conference All-Academic Team. "The transition to Columbia was not difficult at all," Dyroff said. "My teammates definitely made it easy. I feel like I've known them for four million years. When I took the summer class here, I would walk around the campus at night and just shout, 'Guys, look where we live!' I love the city. There's something always happening." Charlee admits that the academics in this new environment are rigorous, but she has been enjoying her identity as a Columbia student. "I want to learn a lot," she said. "I think the school has so much to offer. I'd like to get substance out from my classes instead of just taking them." As for the future, Charlee says she has not figured out what her major is going to be, but she knows one thing for certain—she would like to play in an overseas league after graduation. "I honestly don't know what's happening tomorrow," Dyroff said. "I'm just taking it day by day. But I want to play overseas somewhere. That's my dream. My major can change tomorrow, but my dream isn't going to change." Both Dyroff's academic and athletic careers are constantly moving forward with strength and dynamism. Just as brilliant as she is on the court, she struts through her life on this new campus with a cheery gait. "I have really high expectations for my career at Columbia because I believe it's limitless," Dyroff said. "The expectation for myself is to keep progressing, keep moving. My biggest goal is to give it all I've got. At the end of my three more years, I'd like to have a great journey."

Volleyball Athlete of the Week