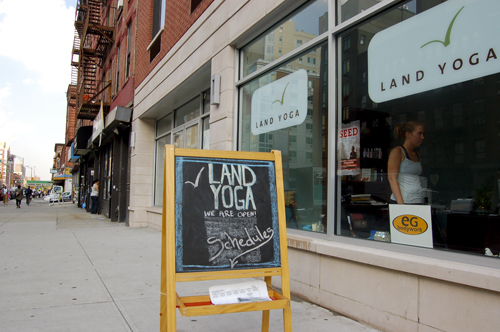 Stretch summer into fall the literal way—on a yoga mat. Morningside Heights is hardly a mecca for yoga studios, but on June 16, Land Yoga (2116 Frederick Douglass Blvd., between 114th and 115th streets) brought Ashtanga Yoga to the area. Proprietor and primary instructor Lara Land, who calls herself "very collaborative," organizes a lot of workshops and events, including free yoga at Morningside Park on Saturdays at 4 p.m. and a workshop on Sept. 25 with senior yogi Christopher Hildebrandt at the studio. Ashtanga Yoga was created by guru Shri K. Pattabhi Jois. It is similar to a vinyasa flow but includes more deep stretching and strength-building poses. "The only way to teach this style officially, legitimately, is to study [on] minimum four trips to India," said Land, who received a blessing from the guru himself. "So you have to be highly trained from the source." The two central classes at Land Yoga are Led Ashtanga, during which Land directs the flow, and Mysore Ashtanga, which is self-directed. Class sizes are small. Single Led classes are $18 or 10 for $120. There is one Led Ashtanga Beginners class a week on Saturdays from 12:30 to 1:45 p.m. Regular Led classes are appropriate for those familiar with basic yoga poses. Land doesn't demonstrate but talks participants through and adjusts them in the positions. The class moves at a clipping pace, but the poses are repetitive, especially the Sun Salutation series that start the practice. Mysore practitioners must be able to work through sequences on their own. This can take only a couple of months to work up to. Yogis arrive and leave anytime throughout a multiple-hour window, while Land adjusts people and gives prompts for forgotten poses. In college, Land studied theater, which awakened in her a sensitivity to breath. "I really enjoyed how it relates to connecting with your emotions." For her, yoga became a release of the daily buildup of feelings in the body. Land felt at home with Ashtanga from her first class at a studio in Greenpoint, Brooklyn. After returning from a year spent between India and Rwanda, where she taught yoga to genocide survivors, Land found herself drawn to Harlem. "I started noticing, specifically on Frederick Douglass Boulevard, a lot of development," Land said. "I just thought to myself if I want to live in New York and I want to do this yoga thing, have my own studio, this is my one chance to do it." So she did. Land had carved the airy storefront space, originally an office, into an entryway, a room used for bodywork and skin care, the studio, and a locker room. The soft green practice room color was chosen according to Vastu Vidya, the Indian version of feng shui. The blue front room was inspired by Land's sari, which she has turned into pillow cushions for the welcome bench. Though her current clientele consists mostly of moms and neighbors to the studio, Land also has a couple of male Columbia student regulars. One is Omar Haroun, Law/Business '12, who co-created an app called Sportaneous, through which Columbia students can register for reduced-price Led classes through September. "It's all about checking in—it alerts you that your friend's going to a class and why don't you go," Land said of the app. She particularly encourages men to try Ashtanga because it uses a lot of upper-body strength, especially in repetitions of the yoga push-up, chaturanga. Land insists that yoga improves all aspects of the body: muscle tone, digestion, nerves, heart rate, lung capacity, balance. "Everything," she says. "That's why the word 'yoga' means 'union.'"