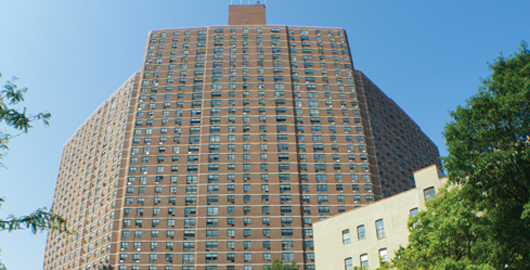 Though some griped about higher Con Edison bills, tenants of one Manhattanville residential building were pleased with their cool summer, thanks to complimentary air conditioners. A 35-story building, 3333 Broadway looms high at 133rd Street, with many residents' windows facing directly over Columbia's main construction site in Manhattanville. Last spring, Columbia offered to provide and install free air conditioners to 3333's residents with apartments facing the construction so that they could keep their windows closed during hot summer months. As the summer comes to an end, residents who did receive the air conditioners said it made a difference. "I think it's a nice gesture," said Rachel Henderson, who has lived in 3333 for about two years. "Construction happens all the time in the city." Fellow resident Imy Berry agreed. "Air conditioning units are expensive," she added, noting that the four air conditioning units that she received now belong to her personally, as opposed to the apartment itself. "It seemed like a fair balance." So did Gina Calhoun, a 3333 resident of 20 years. "I couldn't afford it myself personally, and my daughter is an asthmatic," Calhoun said, noting that she didn't have air conditioning before. "She needed it in her room." When the University first announced its plans, officials faced skepticism from some residents, who criticized the effects of construction on the neighborhood and asked why air conditioning units were not available to everyone. "They're not doing it in good faith," Alicia Barksdale, president of the 3333 Tenants' Association, said recently, noting concerns about increased dust from the construction site. But University Facilities spokesperson Dan Held emphasized that the air conditioners had nothing to do with dust, calling them "a noise mitigation measure" in a statement. The air conditioning units were installed by the building's management company, Urban American, which said it had installed 1,100 to 1,200 air conditioning units. "The installation measure was largely a success," Urban American spokesperson Joshua Eisenberg said. But there was no escaping that cooler temperatures meant higher bills. "It went from about $70 to about $300 and change," Calhoun said of her electric bill. Fellow resident Benny Almcar said his electric bill jumped from $70 to about $200. "The electric went too high, and I don't even use it that much," he said. "I saw lot of people who stopped using them because their bills went so high," Calhoun said. "A lot of people just couldn't afford it." katie.bentivoglio@columbiaspectator.com