Columbia should do something for Constitution Day

Columbia should do something for Constitution Day 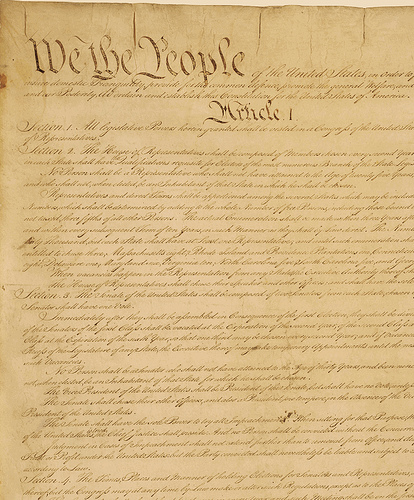 Two hundred and twenty four years ago as of today, the Constitution of the United States was ratified as the founding document of our government. In 2005, Senator Robert Byrd of West Virginia introduced legislation to make Sep. 17 of each year a federal holiday. As such, any university receiving federal money would be required to do something to commemorate the Constitution's signing. It passed, and for the past six years Sept. 17 has officially been Constitution Day. And as a University receiving federal funds, Columbia has had to do something to celebrate the signing of our founding document.more In the past, Columbia has taken this holiday to heart and organized faculty panels to discuss the meaning of the Constitution, its role, and continuing national importance. However, last year marked an unfortunate departure from that tradition. Rather than fostering discussion, analysis, and appreciation for the Constitution, the Office of Community and Government Affairs lamely offered information about original documents in Butler by John Jay and mentioned that free pocket Constitutions were available in Low. This year, the Office of Community and Government Affairs' website is again sparse in its Constitution Day events. It merely recycles last year's unimpressive invitation to dive deep into Butler to have a patriotic experience in the rare manuscripts section. To add insult to injury, the email we received earlier this week snidely suggests that we have "lost or mislaid" our pocket Constitutions, and that more copies will be offered in Low—though they know we won't bother to take up this offer. This University needs to do better. Regardless of what one may think of Senator Byrd's law, it remains a law, and the requirement to celebrate Constitution Day applies. The question the administration faces is whether to do the bare minimum to comply with a mandate or take it as an opportunity to meaningfully celebrate one of the most inspirational and effective documents ever penned. If that sounds like hyperbole, consider the fact that the United States Constitution represents the founding document of the longest-living democracy still operating in the world. It has created a state that enshrines free speech, freedom of religion, and a system of checks and balances that keeps tyranny far at bay. Does such a document not deserve a public and passionate tribute enhanced by dialogue, analysis and, yes, criticism? It is especially concerning that Columbia, the alma mater of Alexander Hamilton (one of the Constitution's signatories) and John Jay (the document's greatest defender in print) is willing to turn its back on its proudest sons. Why not take a moment to thank them for such a service and familiarize ourselves with their words, consider their consequence, and critique what they wrote? For a school that requires many of its students to read these documents, it seems odd to ignore them on a day when they are legally obligated to celebrate them. I am not suggesting a patriotic rally on Low Steps, nor do I expect every student to appreciate or attend any such Constitution Day events. However, my belief is that the University, in fulfilling a mandate, should do it with passion and excellence—especially when it concerns the United States Constitution. Derek Turner is a Columbia College senior majoring in anthropology and political science. He is a former Spectator opinion columnist and a current member of the Editorial Board.