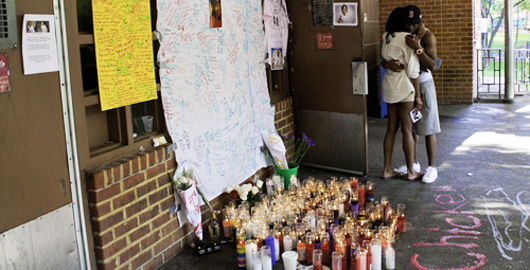 The death of one of the nation's best high school basketball players last weekend is serving as a wake-up call to the West Harlem community, residents say. Tayshana Murphy, 18, was shot down in the early hours of Sept. 11 on the fourth floor of her building in the General Grant Houses development on 125th Street. A popular high school senior who was ESPN's 16th-ranked point guard in the country, her death has shocked a community conditioned to youth gang violence. Jason Harper, a community affairs officer for the 26th Precinct, described the fight that led to Murphy's death as part of an ongoing dispute between a group from Grant Houses called Three Stakxs and its rival crew from Manhattanville Houses on 126th Street called Make Something Happen. Grant Houses are in a state of fear in the aftermath of the shooting, according to resident Nana Scott, 25. "We don't go over there," she said of Manhattanville Houses. "The fighting's not going to stop. You see them doing the same shit every day, because they don't know what they're fighting for. I have two kids, and I'm scared to have them around." "Everyone's mourning her now, but what I keep thinking is, after the funeral, are they going to learn?" Grant Houses resident Kiki Johnson said. "And the answer is no." Police have so far arrested one man, 24-year-old Terique Collins, who is alleged to have given the shooters the gun used to kill Murphy. According to Police Commissioner Ray Kelly, investigators are still seeking Robert Cartagena, 20, and Tyshawn Brockington, 21, in connection with the shooting after viewing surveillance footage of the two men with guns in their waistbands. The motive of the shooting is still in doubt, with some rumors associating Murphy with Three Stakxs and others calling it a case of mistaken identity. Rev. Vernon Williams, of Perfect Peace Ministry Youth Outreach on 124th Street, works to turn Harlem's youth away from the gang lifestyle. He said that many of the young people have been fighting each other since they were going to school together. "It's become less safe here over the past year, and one of the things that has developed are the street teams," Williams said. "We try to get out there with the resources to engage them and keep them busy, but we don't have all the resources." NYPD statistics show that shootings in city public housing projects have doubled from 2009 to 2010, with the sharpest increases occurring in Harlem. Murphy's murder has also galvanized city lawmakers, with the topic taking over a recent community board meeting. "The murder of Tayshana Murphy is a tragedy for my community and our city," City Council member Inez Dickens said in a statement to Spectator. "She was struck down violently and senselessly. We are not supposed to bury our young. Something is very wrong. I have worked with my colleagues to create programs and safe environments to stem the tide of youth on youth and gang violence." "Clearly, we must do more," Dickens said. But many in Harlem are fatalistic about the prospect of bringing peace to Harlem's youth—and pessimistic about a police force that they see as biased and untrustworthy. "If you talk to the new Harlemites, they're feeling fear and they want the NYPD to do something, but locking someone behind bars is not the answer," Rev. Williams said. "If you talk to parents, they're afraid because they know their kids are engaged in war. This is mass destruction in the impoverished community, and the weapon is guns." Murphy's sister, Tanasia Williams, 21, described her sister as "outspoken, outgoing, fearless," and her loss as a tragedy to her family and the community. "I'm her older sister and I was supposed to protect her," she said. "The pain and anger is never going to go away, and I don't want it to go away. I want it to hurt." Like many others, Tanasia is pessimistic. She describes the atmosphere in the community as one of "grief, pain, and anger in a revenge kind of way." As Tanasia and some friends stand in front of the building where her sister fell, discussing spotting suspicious kids from Manhattanville hanging around Grant Houses, two police officers walk up and pull one of her friends away to question him. She is wary, but continues talking. "The fighting will never end," Tanasia explains. "Nobody wants to take a loss. This is the projects. This is what we do." daphne.chen@columbiaspectator.com