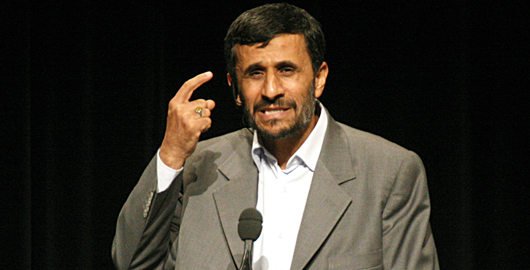 Members of Columbia's international relations group CIRCA will not be attending a dinner with Iranian President Mahmoud Ahmadinejad on Wednesday after the invitation was rescinded by the Iranian mission to the UN. The change of plans followed a week and a half of extensive media attention on the dinner plans, including an erroneous Fox News report that University President Lee Bollinger would be attending the dinner and other incorrect reports stating that the University was hosting the event. Students had also organized an on-campus protest for noon on Wednesday, called "Just Say No to Ahma(dinner)jad." CIRCA members said that they were informed by the mission on Monday that its students were no longer invited to the dinner in the wake of the media firestorm. But other students will still be attending the dinner, which will take place as scheduled on Wednesday. Ahmadinejad has previously held private dinners with students, diplomats, professors and others, and representatives from Yale and New York University have attended in the past. CIRCA members said that even though their invitation had been revoked, students from Columbia's School of International and Public Affairs would still be attending. Over the summer, members of the group were told that they might be able to take 15 students to dinner with the head of state, whose views on Israel, human rights, and homosexuality have drawn sharp criticism. Ahmadinejad is in town to attend the annual United Nations General Assembly. CIRCA member Rich Medina, CC '13, who had planned to attend the dinner, said that members were never going to the event because they supported Ahmadinejad's views, but rather as a chance to talk to a world leader. And despite the outcry, Medina said he would have liked "to engage on that level with someone who is such a hot topic in international affairs," adding that it would have been a rare opportunity for dialogue. "This would have been an interesting academic experience," he said. In the last two weeks, CIRCA members and the University were subjected to a barrage of criticism from conservative columnists and groups like the Zionist Organization of America. Club members said that they have received dozens of hostile emails, and at one point last week the club decided not to comment further in order to protect its members' personal safety. Last week, the University issued a statement denying any involvement with the dinner. "At no time has there ever been any university event planned or considered involving the president of Iran, nor has there ever been any plan for a dinner involving the Iranian president and President Bollinger," it read. Medina added that when the club received news of the invitations, he didn't even expected the dinner to go through. "I was very unsurprised when they cancelled, because we received a similar answer last year," Medina said. "Last year it was an invitation to have tea at his hotel," which he said was canceled a week later. The Iranian mission to the United Nations would not comment, saying it had no knowledge of a dinner. In 2007, Ahmadinejad made waves at Columbia for his speech as part of the World Leaders Forum, setting off a campus-wide debate over academic freedom and Iranian politics, as well as protests surrounding the event. The student-planned protest against Ahmadinejad this time around will not be canceled, even though CIRCA members won't be attending the dinner, said organizer David Fine, CC '13. Fine, who organized the protest along with Jacob Snider, CC '13, Eric Schapiro, CC '13, and Sam Schube, CC '12, said that "Just Say No to Ahma(dinner)jad" will be renamed "Just Say No to Ahmadinejad." "The only thing that's changed is that we're not going to talk about the dinner," Fine said. "The key thing that made the dinner so salient was the serial abuses of human rights that are committed by Mahmoud Ahmadinejad every day against Iranian people." Still, many students, including SIPA student Diana Ramos, said that opposing views shouldn't mean that students are condemned for speaking with Ahmadinejad, or that he shouldn't speak to American students. "That's the whole point of international affairs," Ramos said. Abby Abrams and Jackie Carrero contributed reporting. karla.jimenez@columbiaspectator.com