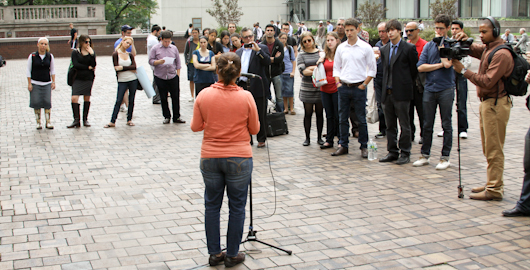 A couple dozen Columbia students gathered between East Campus and the Law School to protest Iranian President Mahmoud Ahmadinejad's human rights record on Wednesday afternoon. The rally was originally organized in order to protest a dinner scheduled for the Iranian leader and Columbia's international relations group, CIRCA. After the Iranian mission rescinded CIRCA's invitation on Monday, the leaders of the protest forged ahead with their plans and renamed the "Just Say No To Ahma(dinner)jad" protest "Just Say No to Ahmadinejad." Student organizer Eric Shapiro, CC '13, said that they decided to go on with the protest because CIRCA students not attending the dinner didn't change the implications of the students agreeing to dine with the Iranian leader. "We took issue with the moral implications of Columbia students sitting down to an off-record, intimate meal with an international pariah," Shapiro said. Still, turnout was much lower than the more than 180 people who had said they were attending the original event on Facebook. Victoria Lewis, CC '13, attended the protest because she had been upset when she heard about the setting of the original dinner. "There was no media and it was a setting where people couldn't really respond," she said. At least one CIRCA member, Rich Medina, CC '13, responded yesterday by saying that he was never going to the event because he supported Ahmadinejad's views, but rather as a chance to talk to a world leader. Jacob Snider, CC '13 and another organizer of the rally, said that his goal was just for Columbia to be represented by different perspectives. "We weren't trying to be the sole Columbia voice," Snider said. "We realized early on that just as the CIRCA folks couldn't represent anyone but themselves, we couldn't represent anyone but ourselves." Students weren't the only ones making their voice heard. Former Iranian political prisoner Shirin Nariman addressed the crowd that gathered in front of East Campus. Nariman spoke about her personal experiences living under the oppressive Iranian regime discussing her time as a political prisoner and the human rights abuses she witnessed under Ahmadinejad's rule. "When I was 17, I had a 13-year-old friend who was arrested and killed. This is the oppressive Iranian regime, and we need to reject such a regime and their representatives, which is Ahmadinejad," Nariman said. She also questioned why Columbia students would want to associate themselves with a dictator. "It's morally wrong. It shouldn't be done," Nariman said. "Many people were killed for a dictator to come to power. Is this what Columbia wants to associate with?" For Snider, the most potent part of Nariman's message was the importance of student activism and the effect students can have on people halfway around the world. "Her last message was important: what you do as Columbia students is extremely valuable. The people who are prisoners for speaking their mind, or currently repressed under Ahmadinejad's regime–they hear these messages," Snider said. news@columbiaspectator.com