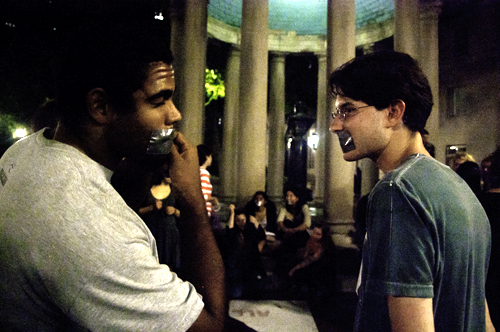 On Thursday evening many students were Troy Davis. About 250 students gathered at the Van Am Quad and embraced the slogan—a rallying cry for the millions of people who oppose Davis' controversial execution in Georgia on Wednesday night—at a vigil sponsored by the Black Students Organization, College Democrats, Amnesty International, and the Barnard-Columbia International Socialist Organization. Members of the College Democrats distributed literature throughout the day on College Walk, their mouths covered with duct tape. Sarah Gitlin, CC '13 and the Dems media director, explained that the group silenced itself in solidarity with Davis, who has been forever silenced. "When we see a gross miscarriage of justice, it's crucial that we step up and speak out and try to reform it in the future," she said. "That a likely innocent man was executed is really nothing short of murder." In 1991, Davis was convicted of murdering a Savannah, Ga., police officer, Mark MacPhail, in the parking lot of a Burger King. On Wednesday he was put to death by lethal injection, a disappointing end to a long battle waged by opponents of capital punishment, who have said that the evidence against Davis was never enough to convict him. Many also alleged that racism played a role in Davis' sentencing; Davis was black and MacPhail white. "Anything that can be racialized I think deeply affects Columbia's students, as the critical people that we are," Felicia Bishop, BSO's Community Liason and CC'12, said. "There's been an interesting discourse around the relevance of race when it comes to crime,the relevance of race when it comes to capital punishment, so that discourse has been disturbing to me, but interesting as well." After lighting candles and covering their mouths with duct tape, the group marched silently around campus, some carrying home-made posters that said "I am Troy Davis, and I am free." "The vigil is important because without this kind of awareness, I feel like there won't be social change if we just ignore it when it happens," Neha Sundarama, BC'15, said. "It's not happening to us, and maybe it won't ever happen to us, but we can't really just let this injustice like slide." The procession returned to the Van Am Quad to continue the vigil with prayers, thoughts, and shouts. Vigil leaders shouted "We are..." and participants responded "Troy Davis!" Several students spoke about the importance of focusing attention on the larger issue of capital punishment. "We still remember that there are 3,000 people on death row in America," Reed O'Connor, president of Amnesty International and CC '13, said. "We hope that it brings the debate back to national attention about whether or not capital punishment is something we should be involved with in any way." Lauren Chadwich contributed reporting. news@columbiaspectator.com Correction: An earlier version of this article misstated Sarah Gitlin's and Felicia Bishop's titles, and Gitlin's class year.