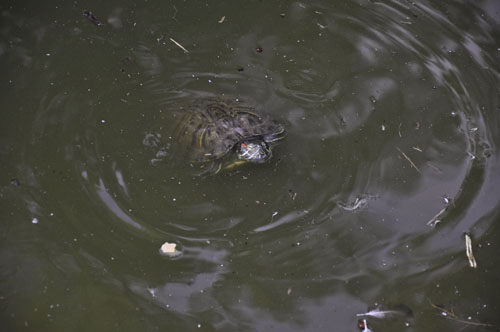 A red-eared slider in the pond at Morningside Park.

On an autumn walk through Morningside Park, you'll see kids playing baseball, parents pushing strollers, and the last of the barbecuers holding on to the summer. Easy to miss are the large families of turtles lurking just below the surface of the park's signature pond.

These unlikely Morningside residents are an interesting ecological study, as most of the turtles are not native to the park.

In fact, "almost all of the turtles swimming around there or in any ponds in the city, are descended from animals that were pets," according to Chris Raxworthy, associate herpetology curator at the American Museum of Natural History.

The turtles spend their time hiding in the water, peeking out, and hoping for food as pedestrians approach the pond just off of Morningside Avenue at 113th Street. They swim sedately, only darting into the murky depths when someone or something gets too close.

"There was a big craze for these things in the '60s and '70s," Raxworthy said. "They were commonly sold in pet shops as little hatchlings. People would buy them in a plastic aquarium and when they got too big they'd let them go."

It's unclear exactly how many turtles are living in and around the pond, but some parkgoers report seeing many of them at one time.

"On warm days in spring and summer, they climb all over the rocks" behind the pond, Morningside Heights resident Melissa Cooper said. "I've literally counted 50 on the rocks not counting those in the water."

Brad Taylor, secretary of Friends of Morningside Park, said he has seen hatchlings, about half a finger's length, climbing down the slope above the pond leading up to Morningside Drive.The turtles are longtime staples of the park.

"They've been there as long as I've been involved with the Friends of Morningside Park—that's 11 years now," said Taylor.

"These things live a very, very long time easily 50 to 100 years," Raxworthy said. And the population is likely increasing artificially. "My guess is that people are still releasing them," he said.

Multiple species of turtles live in the pond, but the most prevalent seems to be red-eared sliders, which are identifiable by the red marking on the turtles' heads, according to Raxworthy. He described them as "exotic animals that people have dumped in the water."

"They're not a local species at all," he said.

Unfortunately, red-eared slider hatchlings probably won't survive a New York winter. They are native to the south, and "it's just too cold up here," Raxworthy said.

However, not all of the turtles are destined for a cruel winter, he said. While the red-eared sliders appear to make up the majority of the population, other species could be better adapted for the cold.As hatchlings, they face not only the threat of the cold winter, but also animal predators. Once they grow older, only larger animals—such as raccoons, foxes, or coyotes—prove any real threat, Raxworthy said.

Humans can also be a menace. "Every once in a while, a park worker has to warn kids about trying not to harm the turtles," said Taylor, who in the past has served as the president of the Friends of Morningside Park and the chair of the Parks Committee of Community Board 9. "People try to get at them with sticks and things."

People can also affect the turtles indirectly by littering.

"Sometimes it looks really clean," Cooper said, "but other times " She motioned to the plastic waste floating atop the pond. "I find it really, really sad."

Cooper, who documents urban fauna and other natural sights on her blog, Out Walking the Dog, has written about the "turtle army" several times.

The cold-blooded turtles, who require sunlight to maintain their body heat, can be rather playful, jostling each other for a spot on a prominent rock on the south side of the pond, Cooper said.

They even fight with other animals, Taylor said. A large seabird used to perch itself on the rock and the turtles were sometimes successful in driving it away.

Joining the turtles in the pond are ducks, fish, and, this year, a larger-than-usual flock of 22 Canada geese, Taylor said. In the past, the pond has also played host to a wild turkey and a white egret.

"It's quite a little ecosystem in that pond," Taylor said.