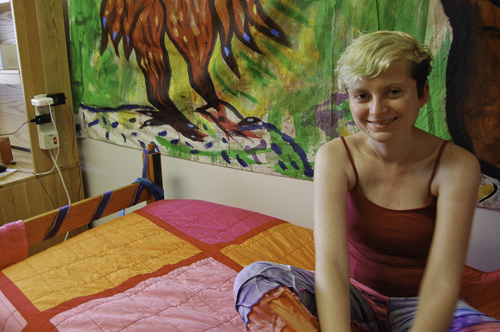 Twenty-five African birds, 200 minutes of birdsong, and approximately 28,000 syllables—that is the senior thesis project that Julia Pilowsky, CC '12, has taken on this year. Pilowsky traveled to Kenya this summer to record the birdsong of the Superb Starling, an iridescent bird native to Africa and notable for living in a rare social hierarchy that actually affects its song. "In most birds, males have more complex song than females ... but in this case, what I expected to find is that the females would also have very complex songs," Pilowsky said. She was right. To find that answer, Pilowsky flew directly from South Africa, where she had studied abroad in the spring, to Kenya. There, she worked for a month at a rural research center that offered her close access to group of starlings. Every day, accompanied by a gigantic microphone and her research assistant, she left the center to record and study the birds. The assistant identified each bird for her so she could distinguish which gender of bird made which sound. This was crucial to developing her thesis, as both genders of starling enjoy power as the dominant bird. Pilowsky said she was given total autonomy by Columbia. "I had to plan out things myself," she said. "There was no one to tell me how many hours a day should I do it, when should I do it ... where should I go. I had to figure it all out." But the research center tested her endurance as well as her intelligence. "By the very end of Kenya, I was getting pretty homesick just because it had been five months, and that was wearing on me after a while," Pilowsky said. "There were seven people in a room, sleeping, like, just one bed right next to another, and the showers showered down river water. It came out brown from the shower." Pilowsky's work in assistant professor Dustin Rubenstein's lab gave her the idea to study bird songs, after a graduate student's presentation on bird calls. "At the end, she said, 'Oh, by the way, no one's studied the song.' And I thought, 'Hey, well, I could study the song.'" However, her interest in birds began long ago, when she would carry around John James Audubon's book of birds as a child. "My teacher would let me read it if I finished my reading early in class," Pilowsky said. It was that lifelong love of birds that was the initial inspiration for the nontraditional project, she said. Since returning to the United States, Pilowsky has worked tirelessly on analyzing her research, uploading bird calls onto the computer and breaking down the different syllables. So far, she has found that Superb Starlings can make 70 different syllables, the same number of phonemes as in the English language. This similarity inspired her to examine whether syntax can be found in the birdsong and investigate whether certain syllables always come before or after certain other syllables. Pilowsky hopes to find some engineers to help her analyze the birdsong using the human speech software. She hasn't decided how far to take the project in that direction, but she said the independence Columbia allowed her was important to her research process. "I came up with it and I carried it out. It feels very much like it's mine," she said. news@columbiaspectator.com An earlier version of this story misstated the number of birds Pilowsky recorded—she studied 25, not eight, birds. Spectator regrets the error.