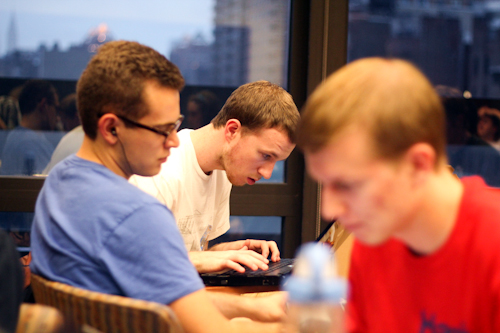 Raymond Ehlers, center, Justin Hines, left, and Hans Hyttinen at the NYC Hackathon this weekend at NYU. Ehlers and Hines were working on an iPhone app that can recognize and give information about paintings.

To the girl who can't remember who painted "Les Demoiselles d'Avignon," the guy whose Art Hum textbook was mysteriously soaked in the shower, or the wannabe deep thinker at the Met, Columbia's Application Development Initiative has an app for you. At HackNY, a 24-hour application development competition, Justin Hines and Mason Silber, both CC '13, created ArtByBit, an app that outputs a painting's time period, artist, and more when the work is photographed. Hines, Silber, and other members of ADI came together on Oct. 1-2 at HackNY's fall 2011 hackathon, an event that focuses on bringing people of all interest and proficiency levels together to create apps for computers and smart phones. "I enjoy this event because it's fun to interact with like minded people, people with an interest in entrepreneurship," Cole Diamond, SEAS '13 and member of ADI said. ADI also holds weekly workshops that teach aspiring techies a range of skills, from everything necessary to become part of a startup company to how to make a website for a student club. "We do a lot of workshops to teach people how to get on their computers and build stuff, which is really the bread and butter of the club," Kathy Sun, CC '14 and member of the ADI executive board, said. The members of ADI said that the club fills the gap between computer science in the classroom and its real world applications. "I think the mentality of ADI is very hacker-esque. But it's also like, 'Here's a problem, let's fix it,'" Sun said. ADI strives to unite students with a common interest, and through attendance at competitions like HackNY, integrate members into a larger community. "Before ADI came around, the computer science community wasn't that big. Now everyone gets to work together. It's awesome," Silber said. In early 2010, ACI organized the first ever DevFest, a week-long series of lectures and workshops geared toward connecting new programmers with the New York startup community. "DevFest really put us on the radar," Sun said. ADI was recognized by the Activities Board at Columbia in the spring of this year. The group won the Star Newcomer Award, given by ABC to the club that has the biggest impact during its first semester. ADI has grown considerably since its inception. "The longer we're around, the more people will know we're around," said Andrew Hitti, CC '13, ADI social chair, and Spectator's alumni director. "The more people who know, the more people we can teach."