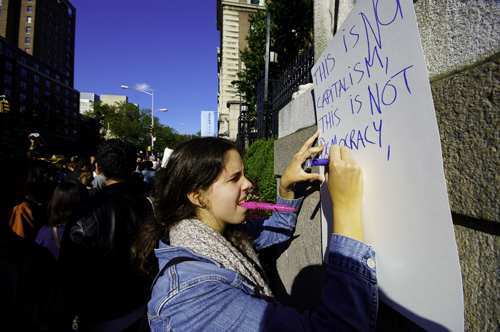 Holding up a sign reading "Columbia Students Against Greed" and whistling the beat to the chant, "Show me what democracy looks like! This is what democracy looks like!," Maya Gaul, CC '13, marched down to Wall Street on Wednesday with about 100 other students. They joined thousands of people at City Hall after a walkout in solidarity with the Occupy Wall Street protests, which have been taking place since Sept. 17. Students met outside the campus gates before heading downtown to join community groups and a number of large unions, as well as students from SUNY and CUNY. But even though solidarity with Occupy Wall Street was the main uniting factor for the protestors, students and faculty had dozens of reasons for attending. One student, Trenton Barnes, CC '12, was arrested last week at one of the protests. The son of factory workers, Barnes said his parents support his participation in Occupy Wall Street. "My dad was sick and had to take too much time off work," Barnes said, explaining how his dad lost his job. Sam Shuman, GS/JTS '13, said his personal situation was much different, but he still wanted to participate. "I am a privileged, white man who fancily doesn't have to deal with a lot of the problems that I'm fighting for on a day-to-day basis," Shuman said. "Whenever there is abuse going on, it needs to be addressed." Initially marked as a youth movement, Occupy Wall Street has now attracted people of all ages, including Columbia faculty and alumni. Some professors encouraged their students to walk out, while others participated in the walkout themselves. Mae Ngai, Lung Family Professor of Asian American Studies and professor of history, and Michael Thaddeus, associate professor of mathematics, met at the gates and rode the subway downtown with students. "This march doesn't have a well-defined agenda," Thaddeus said. "It's a way to allow the ordinary citizen to display outrage." Ngai added that if she had class during that time, she would have canceled it. "We're mad too," she said. HOW IT CAME TOGETHER CUNY and SUNY students organized a walkout this summer in order to challenge soaring tuition rates and cuts to faculty benefits. Yoni Golijov, CC '12 and one of the organizers of the walkout, attended some of the planning meetings over the summer, but didn't think to bring the movement to Columbia. But after the emergence of Occupy Wall Street, a protest against corporate greed, unemployment, and corrupt financial institutions, students saw cause to join the two protests. "Student debt affects private schools as well," Golijov said. "We're fighting for the same thing." Columbia students agreed, and some wanted to join Occupy Wall Street itself. Eventually the walkout was advertised through Facebook and by student groups, including CU Activists and the students organizing Ethnic Studies Week events. For Salomeya Sobko, CC '12, protesting against student debt hit home. "I just found out that I have to take out $10,000 more in loans this week," Sobko said, adding that both her financial aid award and her parents' income have decreased this year. The protesters also chanted in opposition to the arrests of 700 people at Brooklyn Bridge last Saturday. "In part it is a response to the arrests," said Yesenia Barragan, GSAS, who was present at Brooklyn Bridge on Saturday. "In part it shows that students are mobilizing and that we're done being screwed by Wall Street. Many of us are in debt." 'WAKE UP, WALK OUT' Students and faculty met at the gates on 116th Street around 3:30 p.m., ready with whistles, chants, and signs reading, "Wake Up, Walk Out" and "Corporate. Greed. ... Redundant!" Some students wore face paint, like Barnes, who also carried a sign that read, "Down with Capitalism." "I'm trying to create a situation where people are thinking of living differently," Barnes said, explaining the face paint. "I've dreamed about this." The excitement only grew as students boarded the downtown train, signs and all. Alexandra Afifi, CC '12, said she was pleasantly surprised by the number of Columbia students and faculty who participated. "I heard someone say, 'Columbia's back' on the train," she said. After exiting at Chambers Street and joining in with unions and protesters, the group from Columbia split up. A few stuck together, their chants adding to the thousands of people shaking tambourines and carrying signs at City Hall—including many union members, who showed up in full force for the first time on Wednesday. WHAT COMES NEXT Occupy Wall Street has now spread to other cities, including Los Angeles, Chicago, and Boston. Solidarity events have also been held, or will be held, worldwide in Spain, Syria, and France, among other countries. October 15 has been designated a day of global solidarity. Though critics have pointed to of a lack of focus in the protesters' aims and a lack of focus on how the financial issues affect minorities and immigrants, Goslijov said he has high hopes for the protests. He explained that a declaration of grievances has been outlined during general assemblies held by Occupy Wall Street, and said that working groups are coming together to work on widening the inclusion of people of color in the cause. "We're just outraged. We want to unite around the fact that we have a First Amendment right," Golijov said. "We're going to change the world." Not all of the people at yesterday's march were as optimistic, even though they're supportive of the movement. Jason Resnikoff, GSAS, said this is probably something he'll tell his children about one day. "But it also depends on how it ends," he said. Parul Guliani contributed reporting. karla.jimenez@columbiaspectator.com