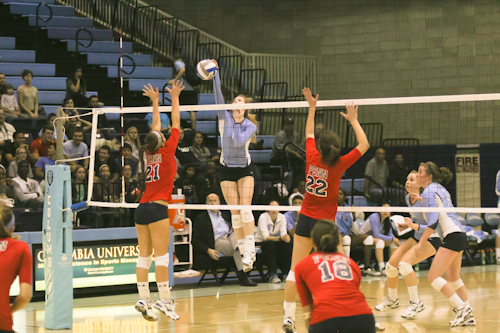 Freshman Caitlin Brenton has already notched 73 kills for the Lions this season.

Kills and blocks—that's all it took for freshman outside hitter Caitlin Brenton to bring the volleyball team to a series of outstanding performances and consequential victories. First, Cornell fell; Brown followed next. The Lions then stomped on Princeton 3-0 and most recently gained a riveting win against Penn, 3-2. There seems to be a magical spell in the team that has garnered victories—and that spell might be Brenton. The freshman has proven her resilience and honed judgment in split second decisions during all of her past games as she runs back and forth, from defense to offense, and from a kill to a block. "Cate's competitive attitude helps her and the team tremendously. Everyone on the court knows that Cate wants the ball, wants to score, and to win the game," associate head coach Brie Katz said. "She has incredible physicality along with athletic explosiveness. She and the setter Colleen [junior Colleen Brennan] had a good connection this weekend, and the middle blockers who got the honor roll helped Cate, who took advantage of what the team gave." According to senior captain Cindy Chen, Brenton is a power hitter who can hit above the block, making her formidable against opponents. During the game against Princeton last weekend, Brenton managed to score eight kills, hitting .571 while recording four blocks. She continued to perform against Penn the next day with 12 kills, hitting .440 with three digs and five blocks. Her source of power and dynamics seems to lie in her ability to focus and then explode with intensity as she rises up over the net. "I'm just getting comfortable with the system, the way we do things as a team, the way the team does here at Columbia. The whole team was playing really well," Brenton said. "No player can do really well without the rest of the team." Katz believes that Brenton's performance on the court may have stemmed from her spirit of friendly competition. "There's always a competition regarding a position, and Cate's competitiveness for her own position raises the expectation for the entire team," Katz said. Before being part of the Light Blue, Brenton earned three varsity letters in volleyball at Valley Christian High School in San Jose, Calif., where she served as the team captain during her junior and senior year. In her sophomore and junior years, she helped the team advance to the finals and finish second at sectionals. The NCAA game is a long way from her high school days in the Bay Area, though. However, Brenton attributes the easy transition to the college game to help from her fellow freshmen teammates. "The game moves a lot faster. Players are bigger, stronger, jump higher. We are playing more like a leveled game," Brenton said. "To get ready for college, we all worked really hard during the summer. When we got here, we were physically ready to work with the team." Brenton isn't taking her initial splash for granted, though, and is constantly working to improve her game. "Sometimes it's hard waking up really early. But I know that if you don't do well during practice, you're not going perform," the rookie said. "For me every day is the chance to get better, to make myself better, and the team better." According to veteran captain Chen, Brenton has risen to the challenge. "Caitlin definitely has her eye on the prize. She comes in early for preventative treatment, and she gives her all in drills," she said. Her hard work has paid off, as she has helped the Lions to a 4-1 record in Ivy play, good enough for a tie for second place as well as the best starting record the team has ever had. Last Saturday, the Light Blue defeated Penn for the first time since 2005, marking Wilson's first win against the Quakers in her career. The performance earned Brenton Ivy League Rookie of the Week, and she became the second Columbia player to win the award after now-junior Meagan Gaughn in 2009. "I'm really honored. It's a really great feeling," the California native said. "But I can't take all the credit, though. I wouldn't have done it without the team, like the middle blockers and Colleen helped me out a lot. I'm just very grateful." Katz believes the award is more than deserved. "It speaks really highly of the work she has put in practice and her effort put in the games. It speaks for the team's performance too," she said. "It's nice that a player well-focused and ready gets recognized. It sets a great example for the team." While the rest of the team is well-versed in Columbia's sporting history, Brenton doesn't seem to be phased by the fact that the Light Blue has never won a title in the 34-year history of the Ivy volleyball championship. "I want to keep playing well. You're never done getting better because there's always something to get better. I want to win the championship—maybe even two or three times during my years at Columbia," Brenton said.