Columbia tops other Ivies in endowment gains for 2011

Columbia tops other Ivies in endowment gains for 2011 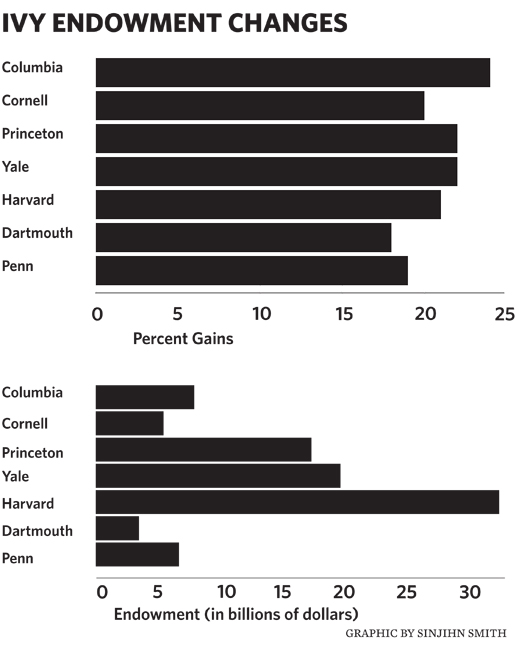 The University's Investment Management Company generated a 23.6 percent return on its endowment portfolio for the 2011 fiscal year, Columbia reported on Thursday. Columbia's endowment has been performing above market value for the last several years, but this year Columbia's gains lept past its peers in the Ivy League, including larger endowments like Harvard's, Yale's, and Princeton's. "Columbia should take great pride in its outstanding investment performance over a long period of time," said senior executive vice president Robert Kasdin, who sits on the board of the Investment Management Company. "For every measurable period since the Investment Management Company was established in 2002, Columbia has produced excellent returns." The University's endowment, valued at $7.8 billion as of June 30, 2011, represents a collection of money and financial assets that have been donated to the University for investment by the Columbia Investment Management Company, a subsidiary of the University. University President Lee Bollinger attributed the impressive gains to the University's record of "prudent investment management." "The dedicated professionals and board of our Investment Management Company have helped ensure that we maintain Columbia's forward momentum in both academic initiatives and long-term development," Bollinger said in a statement. Last month Harvard announced a 21.4 percent gain for fiscal year 2011, bringing its endowment's value up to $32 billion. Princeton's $17.1 billion endowment returned 22 percent for this fiscal year. Likewise, Yale gained 22 percent, bringing its endowment to $19.4 billion. Since taking a dip in 2009 with a 16.1 percent negative return, Columbia's endowment has exhibited steady growth. Last year, the University's investment portfolio showed an annual return of 17.3 percent, hitting $6.5 billion. While the fiscal year 2011 returns reflect normal market growth, Columbia's long-term gains are more impressive. The school's five-, seven-, and 10-year gains have all exceeded market portfolio indexes. Over the past decade, for example, the University has experienced returns of 9.9 percent, compared with the annualized S&P total returns of 2.7 percent for the same 10-year period. "Our ability to achieve academic excellence in the highest tier with several peer institutions that have far larger endowments than our own has been greatly aided on our relative financial stability during these turbulent years," Bollinger said. In comparison, Harvard has experienced a similar 10-year return, having gained 9.4 percent on its endowment. Harvard's endowment took a nosedive in 2009, dropping from $36.9 billion to $26 billion, but rose to $27.6 billion in 2010 and $32 billion as of June 30. However, the president and CEO of the Harvard Management Company has said that shaky political and economic conditions that have arisen since the close of the 2011 fiscal year—including debt ceiling uncertainty, the S&P downgrade of U.S. securities, and the fate of Europe—threaten the future success of their endowment. Kasdin said he believes that despite these economic uncertainties, Columbia's endowment will remain successful. "Columbia's investment team has steered us through periods of market strength and periods of great difficulty," he said. "They've done an extraordinary job and we have full confidence that, over time, they will continue to serve the University well." arvin.ahmadi@columbiaspectator.com