Delbanco says Core threatened by increasing class size, calls on Columbia to focus on the college

Delbanco says Core threatened by increasing class size, calls on Columbia to focus on the college 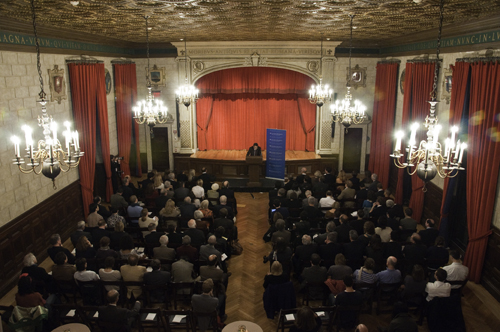 American Studies professor Andrew Delbanco dished out some "tough love" about Columbia College on Monday evening. In a critical speech that drew about 100 people to the Italian Academy, Delbanco argued for more of Columbia's resources to be devoted to the Core and for the need to differentiate between Columbia College and the University. "I believe there is a threat to the Core," said Delbanco, the Mendelson Family Professor of American Studies. "It's not sudden abolition. It's slow attrition. Bloated class size threatens to erode the distinction between the discussion and lecture." Delbanco advocated for a separate endowment for the Core, saying it was "time for the university to put its money where its mouth is." He also criticized the administration for cutting down on faculty input in the admissions and financial aid processes and heavily recruiting wealthy and international students. "We may proclaim our commitment to being need-blind, but if we recruit in Scarsdale and Singapore and Riyadh, there won't be much need to meet," Delbanco said. Delbanco criticized the Faculty of Arts and Sciences, noting that typical faculty meetings draw only 10 to 15 percent of the full faculty. He said the Faculty of Arts and Sciences lacks the "esprit de corps" of the former Columbia College faculty. He also emphasized the difference between the roles of a college, which he said should help students discover themselves, and a university, which focuses more on research and professional training. "A university trains for the professions, but fundamentally, it's an array of research activities with the aim of creating new knowledge," Delbanco said. "A college, on the other hand, is about transmitting knowledge of and from the past so they may draw upon it as a living resource in the future." Delbanco explained at the beginning of his speech that he didn't intend to pull any punches. "Some of what I'm going to say will seem a little tough, but I hope you'll accept what I'm going to say as tough love," Delbanco said. "When I put forward criticism, it's always in the hope that Columbia will live up to its best traditions and values." Aida Conroy, CC '13, a student in Delbanco's Equity in Higher Education class, said she appreciated his courage in tackling tough issues. "I am pretty proud, I would say, because I think that it's difficult to be such an established member of the faculty and express those controversial sentiments," Conroy said. Conroy and Louise McCune, CC '13, both appreciated Delbanco's argument that the administration should give more attention to the college, though they hadn't noticed the college taking a backseat to the rest of the University. "I was expecting more of an undergraduate audience," McCune said. "It wouldn't be that inflammatory to undergrads, but there seemed to be a lot of powerful people." Nicholas Dirks, the Executive Vice President for Arts and Sciences, was in attendence and called it a "great speech," but declined to respond to Delbanco's criticisms further. Delbanco closed his speech with a warning about the transparency of the financial aid and admissions processes. "If the process is not open, frank, and respectful of the intelligence of our alumni, they will, I suspect, think twice about their commitments," Delbanco said. "After all, they went to Columbia, and Columbia has always been about teaching students to think for themselves." Delbanco has written widely on the problems of higher education, but such direct criticism is still rare in the University world—something Delbanco acknowledged. "That's the great thing about tenure, right? I can say anything I want tonight, and I'll still have a job tomorrow." news@columbiaspectator.com