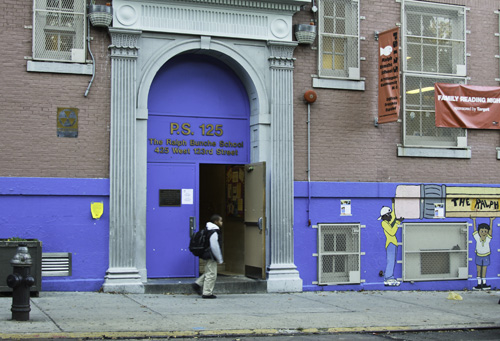 Singing, dancing, and painting aren't things that the kindergarteners of room 112 at Public School 125 get to do often. Citywide budget cuts have left their school with no funding or teachers for arts education. But a group of Columbia students have been working with the school's administrators to get arts back into the classroom—at no cost to the school.

“It's a crucial hour and a half for these kids,” Rebecca Clark, CC '13, said of the weekly classes she and fellow volunteers with Artists Reaching Out lead at two local public schools.

Volunteers from ARO, pronounced “arrow,” have been teaching after-school lessons on visual art, music, dance, theater, and creative writing to elementary school students for the last seven years, but this semester marks a major expansion for the group. They are now teaching all classes from kindergarten to fifth grade at PS 125, on 123rd Street between Amsterdam and Morningside avenues, during the school day.

Day One In room 112, Clark, a co-coordinator for ARO, led a lesson on creating “pictures with our bodies”—essentially charades—for a kindergarten theater class.

One student, at first recalcitrant, took his turn to pose with his arm stretched out, index finger and pinky pointing ahead. Another student figured it out right away: “Spiderman!”

“This is art right now,” Clark said. “We're using our bodies and our voices to make art.”

Some of the kids disagreed. “Art is painting,” said one. “This isn't art.”

“What do you guys think is art?” Clark asked. The responses included “bubbles,” “stickers,” and “paper.”

Over the course of the session, the students learned proper audience behavior, a call-and-response song, and how to give an enthusiastic round of applause.

Clark said she was pleased with her first class on Friday afternoon.

“Theater is kind of difficult to do in a kindergarten class,” said Clark, who is a theater major. “But it's 10 times better than what the kids have currently.”

ARO can also serve as an enjoyable way to de-stress at the end of a long week, Clark said.

“Once you get here, it's so cute, so different,” she said. “How often do you get to interact with kids in college? We're getting in touch with the real world for an hour and a half.”

First thing to go'Reduced funding for arts in elementary schools is a national trend.

“It's the first thing to go,” Naomi Lifschitz-Grant, an instructor at Teachers College, said. “In New York, teachers weren't laid off this year, and because of that they cut art programs.”

PS 125 shares a building with two charter schools, which receive public funding but are privately managed.

“They're surrounded by children in uniforms who have arts programs, have more resources, and that affects me,” said Emily Handsman, BC '12, ARO co-coordinator, and head copy editor of The Eye.

When PS 125's principal, Reginald Higgins, approached ARO about leading lessons during the day instead of after school, Handsman said she “couldn't say no.'”

“It's really hard for teachers to include dance, music, and theater in their lessons,” Higgins said. “It's a lot easier when you have it built into your schedule and when you have individuals come in to help you learn ways to work with your students.”

ARO, a program in Community Impact, an umbrella group that covers various service organizations, also teaches an after-school program at Future Leaders Institute, a charter school at 122nd Street and Adam Clayton Powell Boulevard, where it has taught for the past four years. Volunteers piloted an after-school program at PS 125 last semester, and Higgins said they have been a good fit for the school.

“For students that sometimes struggle with the traditional way of teaching, art allows them to access the content in a way that is comfortable,” he said. “It just improves their overall perspective on what school can be.”

“It gives students an opportunity to express themselves, to explore different kinds of materials, and to make sense of them,” she said. “It's fun, and kids need to enjoy learning and enjoy school.”

Coordinating CurriculaIncorporating ARO into the school day is a “really good way to immerse arts in the school even more and also a wonderful opportunity for volunteers who are interested in teaching to actually be in the school day in a class,” ARO co-coordinator Victoria Fox, CC '12, said.

Fox said she plans to coordinate ARO's classes with the PS 125 classroom curriculum.

“If we know what they're studying each week, we can make our lessons relevant to that topic,” Fox said. “That is an interesting challenge and a wonderful way to make arts really relevant and directly help academics too.”

Higgins, who is new this year to PS 125, said teachers could learn about activities to do with their kids from ARO.

“The ARO students are building the capacities of my teachers,” some of whom are "art-phobic,” he said, adding that teachers of older students were worried ARO lessons would take away from time to prepare for standardized tests.

Fox said that increased attention to standardized tests has nearly wiped out exposure to the arts in public schools, but that teachers' concern was “definitely legitimate.” “We're really, really aware we're taking time out of the school day for this, so we want to be sure we're helping the teachers and not placing an additional burden on them,” Handsman said.

Although volunteers said they were happy with their first day at PS 125, not everything went smoothly: ARO coordinators did not know that volunteers would be working in special education classrooms until the day before their first classes.

“My jaw dropped a little bit when I heard that, because we had new volunteers who had never taught before,” Handsman said. “I was kind of worried and a little frustrated, but it points more to the overwhelming nature of running a school without the resources you need.”

In the end, Handsman said it turned out fine. “The classroom teachers were in the room. No one had any trouble,” she said.

Higgins said that the partnership with ARO was just one part of a larger effort at PS 125, which got a C rating in the city's 2011 progress report, to “redefine who we are as a school.”

“When I look out into the classrooms and I see those children, I see myself, and I know that I had certain people who were fighting for me,” Higgins said. “I have to fight as hard, if not harder, for my kids.”