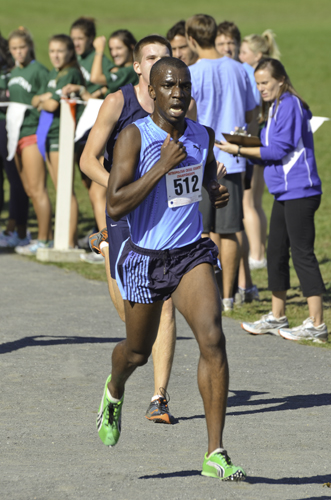 Columbias cross country teams will look for more success at the Ivy Heps in Princeton.

The cross country men's and women's teams head to the Princeton-hosted Ivy League Heptagonal Championships, where they'll square off against the rest of the Ivy League to determine who will take home the team title. There, both squads will entertain reasonable hopes of claiming gold after a successful season thus far. However, it will not be a straightforward feat. "We'll have to have our best day of the year to win the meet," head cross country coach Willy Wood said. The Lions are very much in contention: both squads finished second behind Princeton in 2010, and Wood anticipates this year will be another close fight with the Tigers. The women will also have to watch out for Yale and Cornell, who are expected to be hot on their heels. Despite the weighty task assigned to them, the coach is positive heading into the meet. "We're at full strength, for the most part," Wood said. "All the athletes are pretty fit. We have a pretty strong history of performing well at this meet so we just need to keep that going." Senior Kyle Merber, who will be key to the men's chances, agreed with Wood. "We've set ourselves up real well at this point in the season for Ivy League championships," he said. "I think if we run well and execute our plan we can be the team to upset [Princeton]." Merber is expected to lead the Columbia pack in the 8k race. Behind him, his teammates will provide strong support. "We literally have 11 other guys with the potential to finish top eight," Wood said. The strategy? Simple: run faster than the other guys. "Everyone has to do their best," Merber said. "If you are our third guy, you have to be in front of Princeton's third guy. Everyone just has to keep in front." On the women's side, junior Caroline McDonough, who finished second overall at the meet last year, heads up a squad of both veterans and newcomers. "Most of our Heps runners are juniors, but we have some freshmen," McDonough said. "The juniors have previously experienced running Heps, and it's great to get to share the experience with the freshmen the first time." According to Wood, Waverly Neer will be the freshman to watch. "She seems ready for a big breakthrough, and could be a top-eight finisher at the meet," Wood said. Despite missing the beginning of the season, Neer got back on track with her training and turned in a strong performance at the Wisconsin adidas Invitational several weeks ago. Ultimately, this year's Heps will be a test of guts as much as endurance. "This is probably one out of three meets of the year we really look forward to, so we want to do well," Wood said. "The runners on our team are very confident and very excited. We know we're ready, we're physically strong, mentally strong, we've got the right people lining up at the starting line. I think it's going to be a very good day for us."