Bike share debuts for a day, but program to stay south of MoHi

Bike share debuts for a day, but program to stay south of MoHi 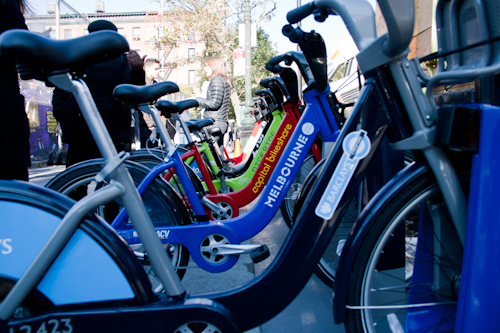 Upper West Siders got a taste of life on two wheels on Sunday afternoon.

The New York City Department of Transportation demonstrated its planned bike-share program on the Upper West Side—but officials also explained that the program will not extend above 79th Street when it launches next summer, though it might extend north in the future.

A station with about 10 bikes was temporarily installed on Columbus Avenue between 76th and 77th streets, and dozens of passers-by went for rides, despite the brisk weather and lingering snow on the ground.

The demo station was installed just a block away from the foot of the Columbus Avenue bike lane, which runs to 96th street. The bike lane has made cycling on the Upper West Side safer despite polarizing bikers and motorists, according to a recent DOT report.

Travis Craw, an executive assistant with the Columbus Avenue Business Improvement District, said he thinks the bike share will make a “huge difference” to the area.

“It will make people safer on the streets  and fill in gaps in the transit system,” he said.

New York's program will have stations every three to four blocks within the areas it is implemented, according to Jocelyn Gaudi, a manager at Alta Bicycle Share—the company that is running the program. New York's 10,000 bikes and 600 stations will also make New York home to the third largest bike share in the world, behind Hangzhou, China and Paris.

Gaudi said that her company is working with the DOT to map the specific locations over the next few months. In Manhattan, the plan is initially to have stations south of 79th Street, and Gaudi said stations may be added further north in the future.

“If we see this as being deemed successful by the community, we will expand,” she said. “We eventually want to serve all five boroughs.”

There will certainly be at least one permanent station near the 76th Street demo station, Gaudi said. Craw added that the Columbus Avenue BID was working hard to get several bike stations on the Upper West Side due to the neighborhood's proximity to the Columbus Avenue bike lane, the Hudson River Greenway, and Central Park—all prominent bike thoroughfares.

Steve Friedland, who tried out a bike at the demo, said it gave a “good, solid performance.”

Although he said that he would be very interested in a membership, he was concerned about the pricing of the system. An annual membership will cost around $95, Gaudi said, and will allow for unlimited 30-45 minute rides, 24/7, 365 days of the year, except during severe weather. Taking longer rides will incur additional fees.

“Low-income people need to be included,” Friedland said. “You need to make sure that it isn't going to be a rich man's toy.”

The health benefits gained from cycling are especially beneficial to low-income people who don't necessarily have the opportunity for a healthy diet or healthcare, he said.

“This could be a life saver, a game changer,” Friedland said. “The more people who are using it, the better.”

While biking has been around for centuries, the technology used to support the project is relatively new. It includes solar-powered stations and smartphone apps that allow users to see whether there are bikes or spaces available at any station. Because the stations don't need to be hooked up to a power grid, they are “very modular, easy to set up, remove, move around,” Gaudi said. That's a big difference from the Columbus Avenue bike lane, which has frustrated business owners with its physical permanence.

“If the community has a concern, we can move it down the street in a matter of an afternoon,” she said.

On campus, Mary Glenn, BC '13, said that she could imagine the bike share being useful during a summer internship. “But I think a factor against me using it would be the fact that when I come back to campus in the fall, the north-most terminal would still be 79th,” she said.

Irene Jacqz, SEAS '13 and a member of EcoReps, is working to organize Columbia's own bike share program. She said that she understood the need to limit the bike share to a smaller area and imagined the DOT was simply responding to demand, but “I hope that goes successfully enough that they're able to extend it further uptown than 79th—there's tons of good biking up here.”