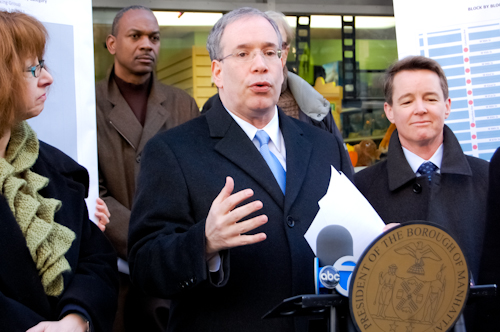 Borough President Scott Stringer called out the West Harlem Local Development Corporation for its lack of progress and transparency in a statement on Tuesday. Through the Community Benefits Agreement signed by the University and the West Harlem community in 2009, the LDC is supposed to distribute $76 million for initiatives related to housing, education, and job training in Manhattanville over the next 16 years. Though Columbia has already paid $3.55 million to the LDC, the development corporation still lacks the organization to disperse those funds. Stringer said he was particularly concerned that the LDC, an independent organization, has still not completed its transition into a non-profit organization with the legal authority to distribute Columbia's money. "I continue to be greatly concerned that the West Harlem Local Development Corporation (LDC) has not moved quickly enough to transition to its successor entity, the West Harlem Development Corporation (WHDC)," Stringer said in the statement. LDC president Donald Notice said that he now expects that transition to be complete in less than a month, but Notice has made these promises before. Last spring, Notice said that the process would be complete by mid-July. Though Notice said that the LDC is "where it needs to be in the review process," many are disappointed with its current status. "Important work remains to be done in creating the WHDC's governance structure and establishing it as a legal entity," Stringer said. "Today, the situation remains largely unchanged." Stringer's objections to the LDC's practices are nothing new—he has written to the LDC several times over the past few years expressing his concern about its structure and management. "I am extremely dismayed that you and the LDC's executive committee seem satisfied with the current pace and course of the LDC's work, and have failed to attempt any measures to ensure adequate engagement of all board members, such as announcing agendas, providing minutes, and proposing action items," Stringer wrote to then-LDC president Julio Batista in March 2010. He concluded that letter by demanding that the LDC finish restructuring before it began disbursing any of the funds to avoid "the appearance of impropriety, favoritism, or conflict." A year and a half later, Stringer's concerns remain unchanged, and he added that he is "dismayed" with LDC's $300,000 allocation for the New York City's Department of Youth & Community Development's Summer Youth Employment Program. "I pointed out in my letter last year that they have done so without a formal application process, without public notices, without protocols for selection, without advice from a community advisory committee and without adequate, transparent discussion by the LDC as a whole," Stringer said Tuesday. "These fundamental issues have yet to be addressed." Community Board 9 has been making similar demands of the LDC, with few results. Chair Georgiette Morgan-Thomas said that she would like monthly or quarterly reports from the LDC in the future as well as greater representation for her members. The development corporation currently includes seats for two CB9 members and three seats for representatives of City Council member Robert Jackson, State Assemblyman Keith Wright, and Congressional representative Charlie Rangel. Stringer said that he hopes the LDC will address the concerns of the community and rebuild itself before undertaking any future projects. "Anything less runs the risk of violating the public trust and jeopardizing the work we have all done to strengthen and revitalize the West Harlem community," Stringer said. Representatives from the LDC could not be reached for comment. abby.mitchell@columbiaspectator.com