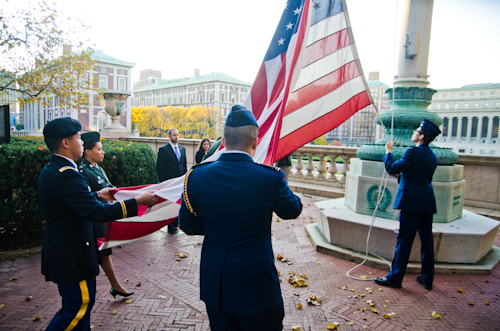 Columbia cadets raise the American flag at dawn on Veterans Day on Friday.

Sixty-eight years after Martin Brod, GS '67, ran off to join the army, he joined current Columbia veterans at a parade Friday. "I've never been in a veteran's parade before, so it's something new to me," Brod, an 85-year-old World War II veteran, said. Over 40 Columbia University veterans registered to participate in the annual Veterans Day Parade on Friday. The School of General Studies sponsored a float, which carried the veterans through a crowd of over 25,000, for the third year. According to GS Dean Peter Awn, the school decided to sponsor a float after considering the hostile treatment of Vietnam War veterans who returned to Columbia's campus in the 1970s. "We simply wanted to reach out to people who really may have thought that Columbia could never ever do anything that would be positive for veterans," Awn said. "The invitation was what mattered, the sense of reaching out and saying, 'We want you back.'" With Columbia's participation in the Yellow Ribbon Program, a provision of the post-9/11 G. I. Bill implemented in 2009, the number of veterans on campus rose sharply. In the 2008-2009 school year, only about 60 veterans were enrolled at GS—this year there are 222. Dan Lagana, GS and president of the MilVets, praised GS' sponsorship of the float. "It shows the progression of the relationship between the military and Columbia University." Richard Baldassari, GS and the secretary for the U.S. Military Veterans of Columbia University, said that events like this bridge generations. "I think it's an excellent opportunity for us to not only show our support for those who are serving but also meet with past generations, and really celebrate our service together, which is a rare opportunity, especially when it reaches as far back as World War II, all the way up to present recruits who are about to enter service," Baldassari said. Walking with the GS float gave Brod a way to commemorate loved ones he lost in the war. "I was hoping that by being here as a veteran, and being with other veterans we can honor those veterans who were killed," Brod said. Amy Claypool, an Air Force officer currently studying at Columbia's College of Physicians and Surgeons, said that uniting veterans fostered a sense of community that goes beyond school boundaries. "Columbia has done a great job of supporting all their student veterans from all the schools. I'm not even on the same campus as a lot of the other veterans, so these kinds of events bring us all together," Claypool said. news@columbiaspectator.com An earlier version of this story stated that over 40 veterans from Columbia were invited to participate in the parade Saturday. All student and alumni veterans were invited and 40 registered for the parade, which was on Friday. Spectator regrets these errors.