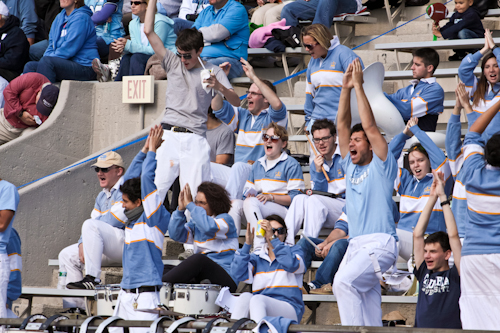 The Columbia marching band will not be allowed to participate in the season finale against Brown because of a poor choice of lyrics.

The Columbia University Marching Band, long known for controversial and provocative humor, may have crossed a line at last Saturday's football game in Ithaca, N.Y. As a result, it will not be welcome at this weekend's season finale against Brown at Baker Field. The decision came from Columbia's athletic department after it took offense to a parody of "Roar, Lion, Roar" the band sang as the football team exited the field following its ninth loss of the season in as many games. "The Athletics Program welcomes the band to our football games to promote school spirit and provide fan entertainment," the athletic department said in a statement. "We believe the actions of the band on Saturday, Nov. 12, were inappropriate and embarrassed our student-athletes, coaches, parents, and fans." After the final whistle blew on a 62-41 Cornell win—a game that got away from Columbia after it finished the first half with a six-point lead—the Lions walked to the locker rooms past the band, which was seated in the front row of the bleachers. "Every time every game ends, we play Roar,'" said José Delgado, CC '12 and the band's manager. "There's music, there's a part in between when we sing lyrics, and there's music again—that's where it happened." Rather than singing the traditional lyrics to Columbia's century-old fight song, many members instead belted an original verse that reflected the losing ways of Lions football—one of a variety of alternative verses that, according to one band member, are meant only for the band bus and Orgo Night, one of the band's most notable traditions. The first two lines say it all: "We always lose, lose, lose; by a lot, and sometimes by a little." According to Delgado, immediately following the incident, a member of the coaching staff confronted the band about the lyrics and the team's reaction. "Someone spoke to our drum major, and he told her they were upset about it, and immediately after, we banned those lyrics," Delgado said. On Tuesday, Delgado had to tell the rest of the band that it would not be welcome at Columbia's final game against Brown. "Our football players, coaches, alumni, [and] parents are extremely hurt, disappointed, and angry by the band's behavior at Cornell," Athletic Director M. Dianne Murphy said. "Because of the band's disrespect for the feelings and efforts of their classmates and fellow Columbians, we believe that allowing the band the opportunity to perform at Lawrence A. Wien Stadium on Saturday undermines the University's institutional support for our football team." The penalty feels particularly harsh for CUMB, which uses halftime of the annual Brown game to officially pass the torch to the next generation of band leadership in a type of "changing of the guard" ceremony. "It's our mission to be at every game, so it's obviously a big deal when we're not able to be out there and play," Delgado said. "For our seniors, it was going to be the last home game. We usually, in our halftime script, have senior nicknames and just pretty much dedicate the show to seniors. For graduating seniors, it's a little difficult to not be able to have that tradition for themselves." The band plans to attend the game in plain clothes and without instruments. The ceremony will likely take place instead during the halftime of Saturday night's men's basketball game in Levien. Before elections on Thursday, band leadership met to discuss its reaction and how to move forward given the penalty. "Although it seems like we have a strained relationship with Athletics right now, it's not our point or mission to keep it that way," Delgado said. "It is our intention to try to be a part of this team, try to be a part of school spirit at games, try to have more members every year that attend events, and try to have more music, better music, and be more creative on the field. Moving forward is the theme of the day." Other band veterans confirmed that CUMB is still completely committed to supporting Columbia's athletic teams—especially this football season, despite the team's poor performance. "In the three years that I've been here, this year's attendance is the best we've had," band member Rich Medina, CC '13, said. "There's no attendance requirement in the band, so anyone who comes to these games goes because they want to be there and support the team." This is Columbia football's worst droughts since it went 44 games without a win from 1983 to 1988, and the temptation to poke fun certainly exists for a group characterized by its unapologetic edge. For Delgado, though, such humor has a time and a place. "I think it depends on the context of the situation," Delgado said. "Sometimes people are in the mood to take a joke, and sometimes they're not. If you don't know how to navigate that situation, you just should not try to even risk it." Despite its controversial and sometimes-offensive antics, the band said that one thing remains constant—its central commitment to the Lions. "We're there for them whether they win or lose," Delgado said. "Obviously we prefer to have a winning team, but in the end, we'll be there for them. This year we took 50 kids to Princeton, Dartmouth, and Cornell. We'll always be there, no matter what happens." "There are probably few people on campus that care more about the football team than the band does," Medina agreed. "For all its snark and cynicism, the band is and always has been one of the last bastions of school spirit at Columbia."