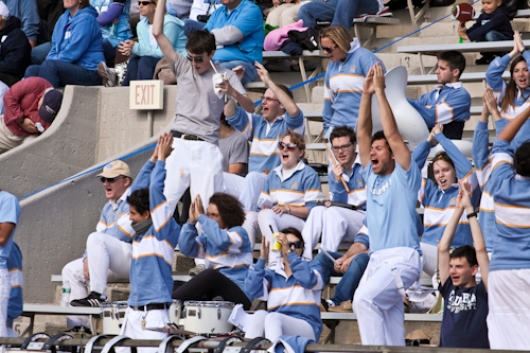 And the band played on. The Columbia University Marching Band, affectionately known as CUMB, will be allowed to play at Saturday's football game, after being banned by the athletic department for changing the lyrics of the fight song at last week's game at Cornell. After the football team fell 62-41 to the Big Red and brought its record to 0-9 this season, some members of the band parodied the lyrics of "Roar, Lion, Roar," to a version beginning "We always lose, lose, lose." The managing board of the band released a statement on Thursday night:

The band is grateful to have been told this evening that the Athletic Department will allow us to attend the football game this Saturday against Brown. We look forward to honoring the senior class - both on the football team and in the band - and cheering the Columbia Lions on to victory.

"We have reconsidered our decision regarding the he Columbia Band's performance at this Saturday's last game at Lawrence A. Wien Stadium at? the football game between Columbia and Brown University on Saturday,? November 19,” said M. Dianne Murphy, Director, Intercollegiate? Athletics? and Physical Education. "We are proud of our talented and dedicated? student-athletes—but as we have discussed this issue over the past day, we come to the conclusion that the core free speech values of the? University are best served by providing a forum both for? speech that might sometimes offend—as well as for the kind of open? discussion that ultimately leads to greater understanding and? collegiality among all members of our community.”