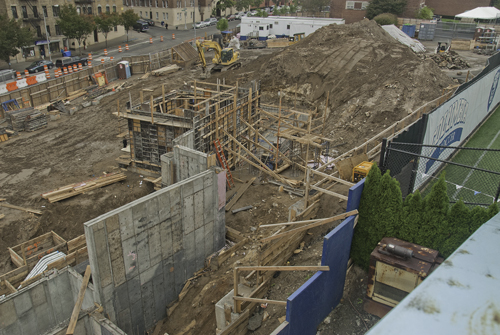 As construction moves forward on the Campbell Sports Center, Columbia is working to balance its expansion plans and its neighborly promises to Inwood residents. Before breaking ground at Baker Field, Columbia composed a set of benefits—including free tickets, lights on automatic timers, and alternative parking sites—to make up for the inconveniences the construction would cause. Some of the benefits include extending tennis court hours, funding 13 new scholarships for local sports camps, and pledging $100,000 a year for the next three years to Isham and Inwood Hill parks. But as residents begin to feel the effects of construction, they are asking for more of Columbia's attention in resolving traffic and sidewalk disruption. "The community was aware that this construction would begin around this time of the year, and people theoretically understand what's involved and what's expected of them," said Pamela Palanque-North, chair of Community Board 12, which represents Washington Heights and Inwood. "But when the construction begins, people are going through that real-life experience and feel put upon." In April, University President Lee Bollinger signed an agreement outlining a series of benefits for Inwood residents and community programs. A tie vote by community board members in October 2010 left them without a say in the Baker review process and the community without a representative organization to sign the agreement. Although Columbia is the only signatory, "we obligated ourselves and published it," Joe Ienuso, executive vice president of facilities, told Spectator in an October interview. Last weekend, Inwood residents gathered on the sidewalk of 218th Street to watch construction workers piece together a crane to be used at the site. Two blocks of the street were closed from 10 p.m. Friday to 10 p.m. Sunday to allow workers to assemble the crane. Theresa Weinheimer, who has lived in Inwood since 1981, said that while she understood that construction is inevitably divisive, the arrival of the crane was more significant than most of the construction-related disruptions. "This is big today, a little more major," Weinheimer said. "It looked very dangerous with Columbia students running to activities." Susan Russell, former chief of staff to City Council member Robert Jackson and Inwood resident for over 30 years, said that the construction has caused even more spatial issues for her neighborhood. "We're so overcrowded," she said. "With the dearth of public space, we're competing for every square inch. We're all on top of each other." 218th Street had been affected by the construction even before the arrival of the crane. Parking lanes on the block just west of Broadway were closed in October and will remain closed until March. Despite weekly newsletters detailing construction changes, including a partnership with the Allen Pavilion at New York-Presbyterian Hospital for parking, resident Brenda Clarke said she was unaware that Columbia offered to provide alternate parking options during construction or other benefits for the neighborhood. "I would like for that to be made more public and know that the University is living up to its word," she said. "I don't have a problem with these expansions as long as the University communicates and seriously listens to residents." A perceived lack of communication on Columbia's part can lead to distrust of the school, residents said. "There's this general perception that Columbia is this behemoth that bulldozes past everyone," Russell said. "I don't necessarily agree with that, but people are mad." "When I first moved there, I was allowed to use the facilities. Slowly, those benefits were reduced without much explanation," David Brodherson, Inwood resident for 22 years and founder of the Inwood Mobilization Committee, said. "It's not to say that I should be allowed in for free, or to do anything there for free, but I do expect the university to be respectful." To better facilitate communication, Columbia has appointed Sandra Harris as a liaison for Inwood residents who have questions or concerns about the construction and consolidated all of its help desks into a single phone number, Ienuso said. "I think that was a very good move on Columbia's part," Palanque-North said of the appointment. "My concern is around the timing and responsiveness—I just hope that the complaints from the residents are a priority." Ienuso said that those complaints are a priority. For instance, if the lights were shining too late, and residents "encountered a problem at 10, 11, midnight, they could call our number and we would get to athletics folks or we would deploy folks to shut the lights if there were no one on the field," he said. But the complaints are few and far between, according to Ienuso. "I'm not aware of any recent complaints about the lights ... which may suggest that the system is working," he said. One of the biggest successes to come out of the agreement, Ienuso said, was Northern Manhattan Appreciation Day, at which Columbia offered locals free tickets and refreshments to a home football game. Two appreciation days have already been held—on Sept. 24 and Nov. 5—and a third will be held this Saturday when the Lions take on Brown. "Part of the whole spirit was to work with the community and provide them some access and make sure they felt welcome as part of Baker Field," Ienuso said. news@columbiaspectator.com