Full campus smoking ban will be subject to review

Full campus smoking ban will be subject to review 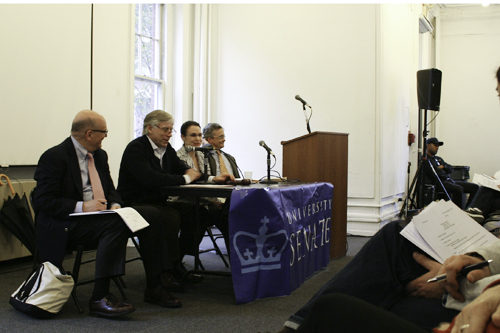 Columbia will conduct a review of how to implement a full smoking ban, University Senate Executive Committee Chair Sharyn O'Halloran said at Thursday's senate plenary. Senators did not vote on whether to ban smoking on campus, but O'Halloran said the University will study how such a ban would work in practice. The senate plenary also featured updates on the implementation of Columbia's NROTC program and a discussion about new employee health insurance programs. The plenary was rescheduled from last Friday to accommodate University President Lee Bollinger's schedule, but Bollinger left before holding his usual question-and-answer session, to the consternation of some senators. The senate voted to ban smoking within 20 feet of buildings on the Morningside Heights campus last December, but University Senator Mark Cohen, a Business School professor, started pressing for a full ban immediately after that vote took place. The senate still has not voted on Cohen's proposal, but O'Halloran said Columbia will start reviewing the issues that could come up if the senate passes a full ban. "It [the review] will be addressing not only the effectiveness of the policy, but some of the weaknesses that we are seeing issues, such as labor unions, issues of safe havens, and things along communication lines, getting the word out," she said. In addition to the smoking ban update, Vice Provost for Academic Administration Stephen Rittenberg told senators that membership of the provost's NROTC committee has been finalized. Asked for details by student senators, Rittenberg said that the committee will include five faculty members and two students, and that its membership will be publicly announced in the next few weeks. "We have established an advisory committee that is going to be starting next week and has been making progress in the various administrative and academic questions that need to be answered in order to start the program," Rittenberg said. Rittenberg was asked by senator Ryan Turner, a graduate student at the School of Engineering and Applied Science, about whether the committee should have student membership from all three undergraduate schools that would take part in the program—SEAS, Columbia College, the School of General Studies. Turner said he had heard that the committee would not have a SEAS student on it. Rittenberg responded that "this is not the type of committee that needs to have school-specific representation." "You had to make a choice on how large a committee you would have and the more people you have on the committee, the harder it is to get everyone to contribute," Rittenberg said. With the yearly enrollment period for employees to choose their health insurance plan set to end today, Assistant Vice President of Benefits Fiona MacLennan made a presentation to senators on the 2012 changes to the University's insurance plans. There have been two new plans added to the mix this year—the result of recommendations from a University task force charged with balancing Columbia's benefits pool as health care costs rise—and new childcare benefits and domestic partner credits were introduced as well. Faculty members debated the new plans, which feature higher co-payments. Many pointed to the fact that some physicians associated with or recommended by Columbia are not covered by the new plans, and as a result, employees who see those physicians are subject to very high costs. "We have actually been working very hard with the Columbia doctors to get as many of the doctors into any of the three networks, so that they will take Columbia employees' insurance," MacLennan said. "That's not something that we can necessarily mandate." In what O'Halloran called the "feel-good" part of the plenary, two Columbia-associated nonprofit groups, Community Impact and Columbia Community Service, made presentations to the senate to about their work. CCS President Mark Kerman said that the presentations were part of the groups' effort of "trying to build awareness," since it is often difficult for them to communicate with the larger Columbia community. O'Halloran also updated senators on the work of Ad Hoc Committee on Conflict of Interest Policy. The committee has now crafted a University-wide conflict of interest policy, which is being circulated to relevant senate committees. news@columbiaspectator.com