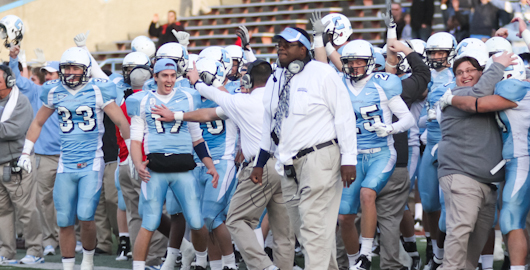 A thrilling win over Brown in the final game of the season was not enough to save head coach Norries Wilsons job.

On Sunday morning, following the football team's 35-28 double-overtime victory over Brown on Saturday and the conclusion of a 1-9 season, the Columbia athletic department announced the dismissal of head coach Norries Wilson. The win was the team's first of the 2011 campaign, and it snapped a 10-game losing streak dating back to last season, when the team dropped its season finale to the Bears 38-16. Despite the high-energy game, the victory was not enough to compensate for the struggles the team faced throughout this season. With a tie for seventh place in the Ivy League and a 1-9 (1-6 Ivy) record, this season was the worst of Wilson's career at Columbia with the exception of the 2007 season, in which the Lions also went 1-9 overall but 0-7 in the Ancient Eight. Though Wilson has had better seasons, his success has been limited throughout his time at the helm. Over six seasons, Wilson has achieved a 17-43 overall record, 10-32 within the league. Wilson first made a splash in the Ancient Eight when he was named the Patricia and Shepard Alexander Head Coach of Football. After spending four years as the offensive coordinator at the University of Connecticut, he became the first African-American head coach in the Ivy League, while also being a head coach himself for the first time. That first season with the Lions was Wilson's best with the Light Blue finishing 5-5 overall, but just 3-5 in the league. Wilson's best finish in league competition came in 2009, when the team finished 3-4 in the conference but just 4-6 on the season. Though previous conversations with past and present players imply a respect and appreciation for all that Wilson has done for the football program at Columbia, his lack of success within the league is impossible to ignore. "Making a decision of this nature is always difficult," Athletic Director M. Dianne Murphy said in the official press release about the decision. "That said, in order to achieve the goals that we have set for the Columbia football program, we believe that it is necessary and appropriate to make a change in leadership at this time." The player made available for comment by Murphy did not respond to interview requests by press time. As the athletic department begins a national search to fill the head coaching position, the goal of developing a winning program should be a main concern. It has been 50 years since the Light Blue won the Ivy League and 15 years since the squad had a winning season.